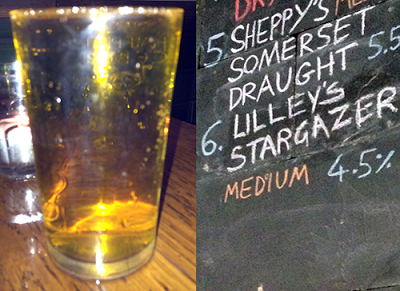 Last cider of the night at Cider Tap for me. Sadly they haven't changed too many of the ciders around, so I am left with a selection of mediums. As I want to make my own mind up about them, I oped to have a half of Lilley's Stargazer. Broadoak or not, it has to be worth a try eh.

A lot of discussion on the interweb has taken place about whether Lilley's make their own cider - whether they are rebadged Broadoak - or even if Broadoak has shut and is now Lilley's. To be honest, I don't really care, although since the recent CAMRA AGM this issue must be at the top of the APPLE committee's agenda of things to talk about (being careful not to take a cheap swipe at them). Quite frankly, until CAMRA figure out a way of monitoring cider producers I feel this (as with many other 'decrees') will be hard for them to police. Oh, hang on, they do... just replicate the way they do it for brewers or does that require both sides of CAMRA working together with joined up thinking n'all.

OK, this wasn't going to get all CAMRA on you!

So, Stargazer arrives as a medium, bright (seriously bright) and sparkling light golden cider. Again, it is far too cold even for a medium. Come on Cider Tap. It isn't lager and doesn't need to be this cold! At 4.5% it's another low alcohol cider. Please note that when I talk about a cider of 4.5% being 'low alcohol' I am not implying that it is low alcohol, just that for a full juice producer it would not be considered a safe level for storage. After all, most ciders that are 'full juice' will be 5.5% and above because it is pretty much self sterile at that strength.

There really isn't that much smell to it - even when it is warmed a little. I cannot really say that it reminds me or demonstrates any fruitiness or body in the nose.

To taste, it is watery. I kind of expected that to be honest. It is a medium (as in not a sweet), which is a positive... it isn't too sweet for it's category:-)  It also tastes of apples - although liberally applied (I don't want to fall into the general discussion about Lilley's/Broadoak). There is a little tannin, though it is very light and almost faint. There is, however, plenty of acid in there - so it could be mostly dessert fruit.

Saying all this there is something about it... I guess you could say it tastes a lot like Magners... OK, it does have more body than Magners, but on the whole it is safe and fairly acidic with a hint of tannin. The aftertaste is also, like Magners, short and pretty watery - although it is fruity.

In all, I am not going to be hunting this cider down. I kind of figured that fairly quickly on (and I do try to remain open and objective!) It is better than Firedancer though. 59/100 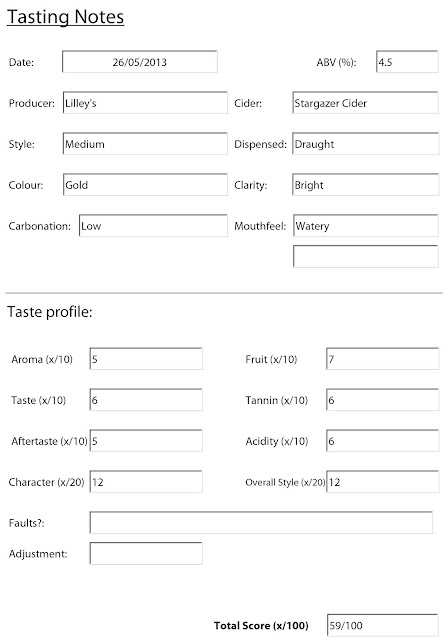