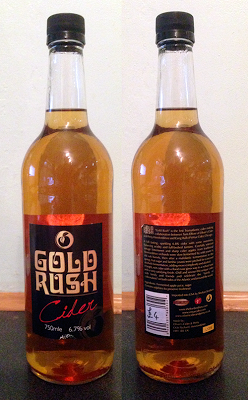 I am sure I have used this phrase several times during these reviews, and it is no less fitting for this next cider - now for something completely different!

What I have in front of me now is a bottle of 'Gold Rush', a collaboration between UK cider producer Oliver's and an American producer, Virtue Cider - it says on the bottle that it is the first transatlantic collaboration. Well, who can argue with that??:-) Why is it different? Well, it is a good old fashioned cider to start with, which has been put through a second fermentation (yup, sugar added and fermentation restarted) using Lambic yeasts. The label says that this adds alcohol and complexity. Let us see!

Using things like hops in a cider is a bit of an American thing going on at the moment. I am not familiar enough with their market to suggest it is a fad, though I am not so sure I would want it to take off over here. Not least of all for all the moaning certain 'beery' groups would do about the abuse of their beloved hops... or the equally vocal moans of the cider purists. Actually, I am just not that sure I would like it - though would be happy to try it just the once for the sake of testing:-) Lambic yeasts, to my untrained ale mind, remind me of Belgian beers or Trappist ale... rich and fruity (and highly alcoholic). It is going to be an interesting journey, this one!

OK, this cider looks fairly bright through the bottle, so I wonder if it has seen a filter. On pouring it has a moderate sparkle, which allows me to smell it even as it hits the glass... quite strong, alcoholic and rough in a tannic way. Oddly, it even smells beery too - quite distinctively. I think Olivers have made a cider with a duel personality!!

The taste is really very interesting. This is a nice deep and full bodied cider. Contrary to being rough around the edges, the tannins feel nicely rounded and there is a complex acidic taste too that balanced the drink out well. A touch of sweetening helps this, though unlike many ciders there is no dumbing down of the flavour. As for flavour, think spicy, farmy and at the same time a lighter note of fairly low level acid taking things up a notch or two.

Underlying all this (really nice) cider that is going on, there is a hint of ale. It isn't at all hoppy - that isn't what this cider is about - but it is there. Granted, I find it mostly in the smell and now that the mouthful is finished it is there again in the aftertaste: almost a lagery finish but with a bit more meat so I guess ale. The aftertaste itself is medium to long and quite fruit. A touch drying right at the end to remind you what you are drinking!

I am very happy to say that the cider wins in terms of bold flavours and overtone of the cider. However, the Lambic yeast has worked really very well with the cider - which is perhaps testament to the quality of the cider base. It is definitely the most interesting 'played around with' cider I have tried in quite some time. I wasn't sure about it to start with, but clearly it has impressed, with a big fat 89/100 and a silver apple from me:-) 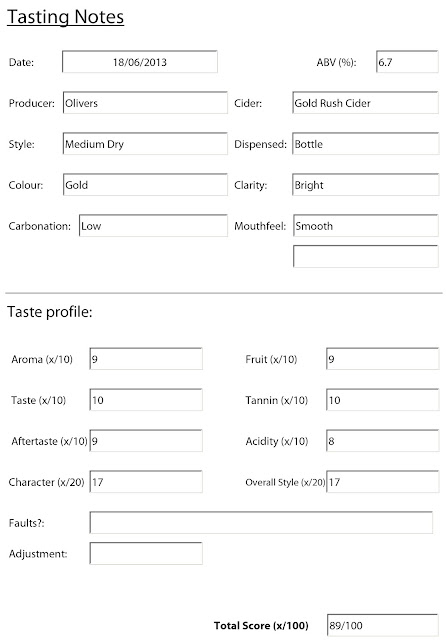