Last cider at the tap for a while I think. They need to have a chance to change their board around... so I will avoid for a month or two methinks. They also need a chance to get the temperature of their cider sorted out too... I know some ciders keep better when cold, but surely they must have the turn around of ciders to bear ambient temperature as opposed to a refrigerated environment!

It will also allow me to write some posts without banging on about how cold the cider it! Plus, I now have gathered some 20 or so ciders at home - all ready to try and all of which I haven't yet tried. What a varied set of drinks to choose from:-)

What I get is a golden, cold, hazy cider that is flat and... actually really quite hazy. The smell is inviting - fruity and a good hint of tannin there. It smells nicely mature too.

What I get in the mouth is quite a sweet cider. This does detract from the flavour on the whole, although in itself it is a very bittersweet cider with a background of acid from what must be bittersharps. Its fairly full on, but outweighed by the sweetness a touch too much for me.

What I also get, though mainly in the aftertaste is that 'orange squash' taste once again. Saccharin. OK, so if its been used for many years it is traditional but, for goodness sake, it is a sweetener. Someone swap the packets for sucralose and we're in business! The aftertaste is moderate in length (though I think the saccharin makes it longer than it really is)

That aside, I do like the cider. It is fairly rough and scrumpy like. There is no refinement required in this cider and it is individual for that fact alone. A score of 68/100 is just shy of an apple, but it is a good cider... I just don't like saccharin (and it probably lost a couple on the lack of smell too - which is a bit unfair to Roger Wilkin's). 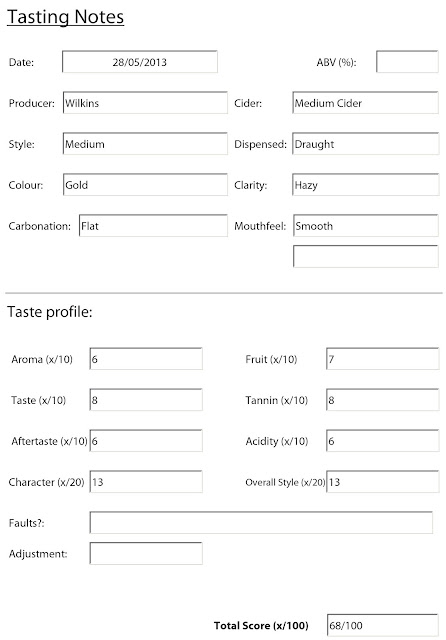 Email ThisBlogThis!Share to TwitterShare to FacebookShare to Pinterest
Labels: Wilkins