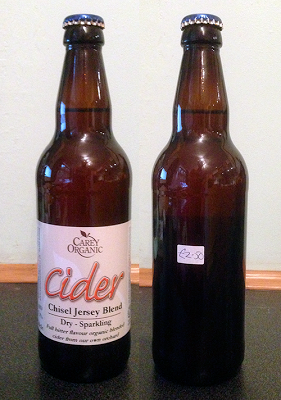 When I bought this, I was sure I had reviewed a Carey cider before now. Looks like I am wrong. Oh well. It is a little odd as I hadn't really come across them until this year, and it turns out they have orchards and all sorts! I guess we are all learning eh!

So, having learned my new thing for today, I turn to another producer who makes a virtue out of having an organic orchard. I suppose that it is fairly rare for producers to use their organic status as a key selling point, although in truth many orchards of cider apples are not treated with chemicals... perhaps only a few pay the subs required of the organic lobby?! Y'know, I think I have bashed the organic movement on just about every organic cider I have reviewed... so apologies for that. However, it isn't the idea of organic things that I am bashing - I like that idea. It is the 'lobbyists' that make a bunch of money out of it that I am not so keen on.

Anyway, enough of that. This cider is going down as a Cider101 as it is a single variety worth exploring. Just to recap why I am doing this. I have used many varieties of apple for making cider and want to see what they taste like in isolation (assuming I can find an unadulterated version). Also, there are varieties of fruit that I have not used before; though the exercise is no less worthwhile for that. Essentially, it is as much about learning the taste of specific varieties of apple as it is reviewing the cider itself - not that the review will be any less rigorous on my part:-)

Chisel Jersey is an apple I have used before. It is a heavy hitter, coming (to me) fairly late in the season - just after the Yarlington Mill. Its a heavy smeller and the juice is dark and thick. In one of my blends it plays quite a big role, and I feel it makes a big difference to the complexion of that blend. This last  year, I couldn't get any, and find the blend a lot lighter as a result. Conclusion?! Well, its a good addition but I may not use it so heavily in future (and this review will help me look at that).

The fruit is considered a full bittersweet - which means full on tannins and a deep full body. I am not surprised at this given my experience of it. It is another of those apples that started life in the 18th century - the pinnacle of apple breeding (can you call it that?). It is, as said, late to flower and late to harvest (orange pippin says Nov/Dec). It is red and green in colour - though the ones I get are much more red than green and are very large for cider apples.

On to this cider then. Made in Herefordshire, it should be pretty well true to form - the fact that it is 7.1% also convinces me that I am getting the real deal with this cider. It pours out quite hazy, so it looks and feels like a bottle conditioned, full juice cider. Perhaps a little too well bottle conditioned though - there is quite a lot of fizz and this has kicked all the yeast into solution (making it almost, well, cloudy).

The cider has an interesting smell to it. Naturally, as expected, it is very deep. It has a real autumnal feel to it - blackcurrants and elderberries, tannin although not so fruity. It is also a bit yeasty - which is unsurprising too given the cloudy nature.

The taste is bold, very drying due to the tannins and with a bit too much yeast at the end which spoils things a bit. It's quite a heavy cider. Fruity and complex, but with a little too much tannin on it's own (and that yeast too). There is no acid in here - so it is definitely the real deal. However I think it misses that a bit to combat the astringency. The aftertaste is short to medium as it ends up drying the mouth. I do get the impression that this is sweetened 'a bit', but it doesn't tame or compete with the tannin at all.

I find it a shame that this has been over conditioned (often the problem is the other way round though). I always figured it would be a challenging cider to create as a single variety. It is heavy and a little unweildly. However, if Tremletts can be tamed, then so should Chisel! It doesn't feel as clean as Tremletts though.

With a score of 72/100, this is a bronze for Carey's - though I would say gold for the experience and information that I have got from it. 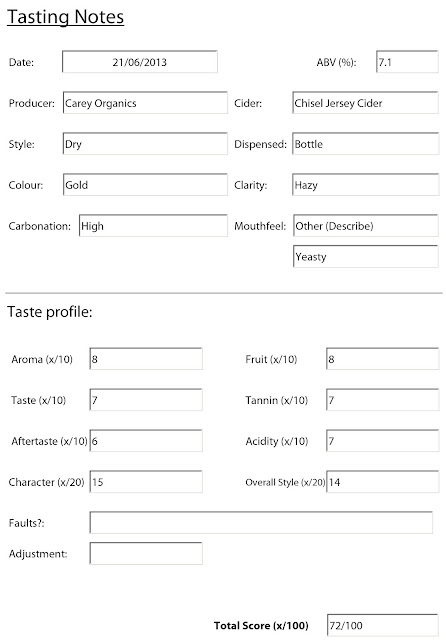