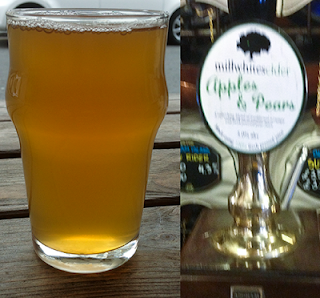 OK then, another (yet another) trip to London and an excuse to try a few more of the ciders found in the capital. This time, I made the effort to walk across the road from Euston to the Bree Louise. This is a lovely small(ish) pub down a side street, some 5 minutes or so walk from Euston. It doesn't have the impressive cider list that the Tap has, although I can see that the ciders are not held below freezing, so it should be an interesting comparison.

It must be the time of year, but there are quite a few 'mass produced' ciders on the list. I do appreciate that fermentation has been slow this year - the new years ciders will just about be released by the time this post goes out. However, at least there is one I haven't tried before.

Apples and Pears is what it says on the tin. A cider made from apples and pears... although I think that technically makes it a Pyder. If there are more than 25% pears then it isn't a cider (technically, we shall see what it tastes like!)

In the glass (note the 'responsible' half pint once again) it smells very appley. In fact, this isn't a bad thing as it comes across as quite a traditional, earthy and full bodied cider. Not getting much pear, if any at all.

However. I knew this was coming! It has a very syruppy co mplexion in the mouth. I am unsure why this should be, but somehow I figured it might. The apple/cider wins almost all the way through - and it isn't a bad tasting cider. The pears come through in the mouth too - not as developed as the apples but noticeable. It's a peary cider as opposed to an appley perry (or, perhaps more appropriately, pear cider).

I do get some tannin in the mouth too. On it's own, the cider part of this drink is earthy. A proper tannic west country cider with sharpness running through it in competition with the tannins. However, there is a sweetness to it as well, and I think that is coming from the pears. Perhaps the pear juice is being used as the sweetener to a full bodied cider? So it's not perry - which would explain why the pears are not developing so much as sweetening.

The aftertaste is moderate in length, and this is where the pears come through most. A juicy pear drop flavour lingering a while in the throat.

It is not a bad cider. I am not sure that it wouldn't be better with some perry as well as the pear juice. However, either I am in a generous mood or it isn't bad at all; a bronze apple to Millwhites with a score of 70/100. Just snuck in:-) 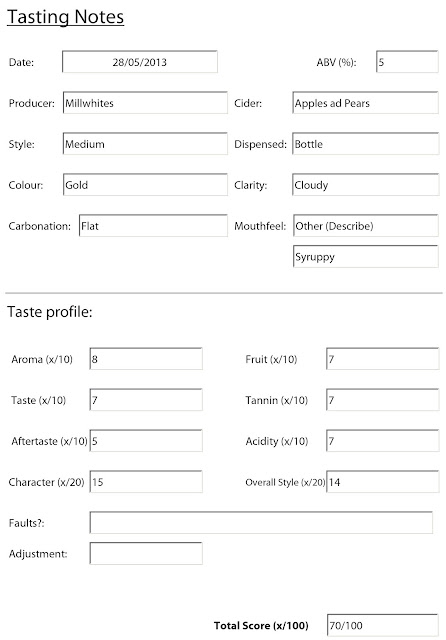