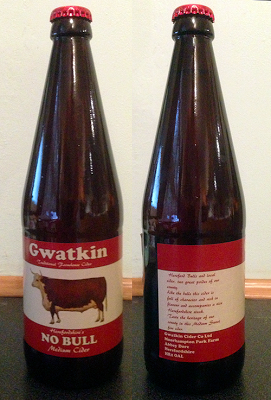 Sticking in Herefordshire for this next review - Gwatkis "No Bull". It is a medium cider, which is admittedly not my first choice. However, how can you refuse when trawling the shelves of Truffles Deli in Ross on Wye??

I quite like the label - the colour and type make it seem 'farmy' and yet quality. I am not so sure about the name of the cider though - stuff like 'Cripple Cock', 'Sui-Cider' and the like are just silly names designed for those who want to get pissed and not for those who actually want to drink it (incidentally, both silly names above are real names of cider - whether they are names of real ciders is a different matter and I will not get dragged into relabelled ciders until I get a spot on Cider101 and cannot think of anything more interesting to write:-)

I confess to being a little surprised at it's 4.5%. I know it was a poor year for the sugar in apples, but this seems a little weak for a full juice end product. Its just a bit light on strength, that is all.

On pouring it is a very dark cider - brown almost. It is also still: not a single sparkle or pfzzz from the bottle when opened. It is mostly clear, although I have categorised it as 'hazy'. Interesting complexion then!

The aroma consists of red berries, currents and  plastic. It's a little odd really. Could it have been fermented in a spirit barrel? Not sure, but it is a little confusing an I would say it is a curious cider. Wow. Hold on. Taste. SWEEEEEET. This is very sweet; where is the cider in amongst the sweetening?

I do not believe this cider is a medium. The sweetening is far too heavy handed for that. In fact, I am not sure if it is a sweet either... a sweet sweet if there is such a thing! Sorry Gwatkins, but this has been overdone. I am searching for the flavour, tannins and acid, but these have been all but grubbed out by the sweetening. I guess this cider gives me the feeling of a demi sec cider from France - sweet and low in alcohol. However, before anyone runs off with the idea that this is a clever thing, I should mention that demi-sec cidre is about 2% alcohol and had a significant element of flavour... it should be fruitier and there must be a deep tannin running through it.

Short to medium aftertaste, though sweet lasts much longer. In fact, I don't think I will need sugar in my coffee later on! OK, perhaps that is a little much, but this cider really could have been so much more than it ended up. A 65/100 is, I think, on the generous side and acknowledges Gwatkins ability generally... 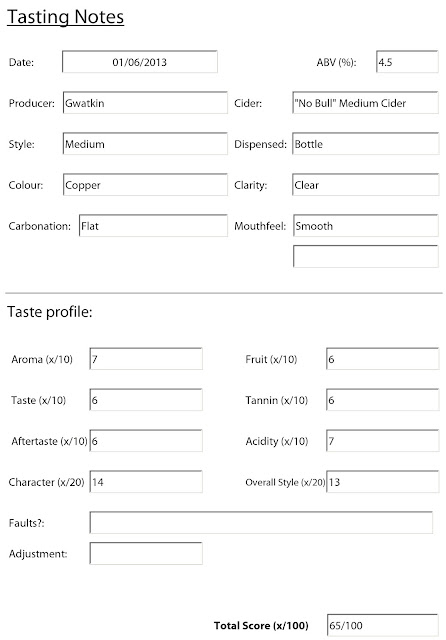