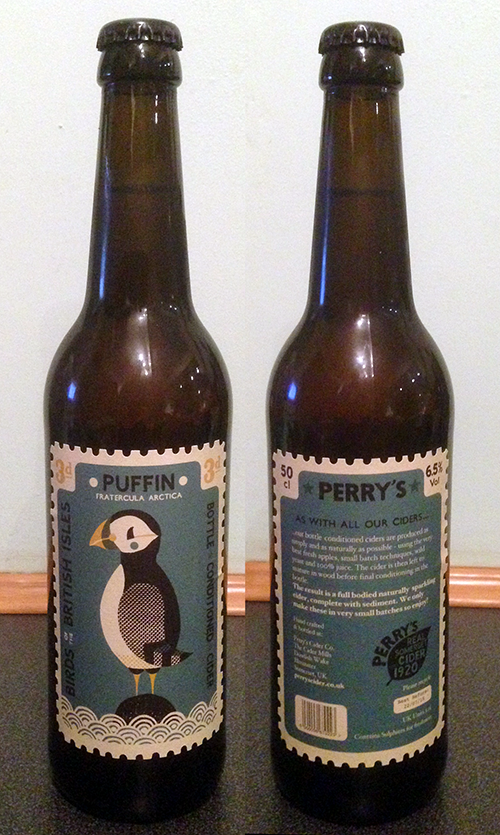 My goodness... I am writing a review for a cider that I drank nearly three weeks ago! Well, I guess this will be testament (or not) to my record keeping! What I can say - as something of a spoiler - is that it is a worthy cider to follow my absence.

Well, I still haven't recovered my pad so I cannot continue the others yet:-)

Puffin cider is another of the Perry's bottle conditioned range - 'using small batch processes'. What this means is that it should be slightly sparkling with a crop of yeast at the bottom (not put there as some kind of artificial cloudiness or dead yeast addition).

Looking at it, this is the dry version, and at 6.5% its all it is claimed so far. I should add that I can also see the yeast settled at the bottom.

Sure enough, it has a low level sparkle and once out of the bottle I can see it is a lovely golden colour. It is rich smelling - a touch yeasty if I am being particularly picky but it feels mature and tannic.

The taste itself is dry - medium dry, but very melow and full bodied. There is some sharpness to it but mostly the experience is deep, fruity cidery notes. The tannin is quite low stated, but it does develop in the mouth to leave it a little drier in the finish.

The aftertaste is also low level and moderate in length. Overall, this is a lovely cider and well presented. And to think I was worried that Perry's might be going in the same direction as Orchard Pig... phew! 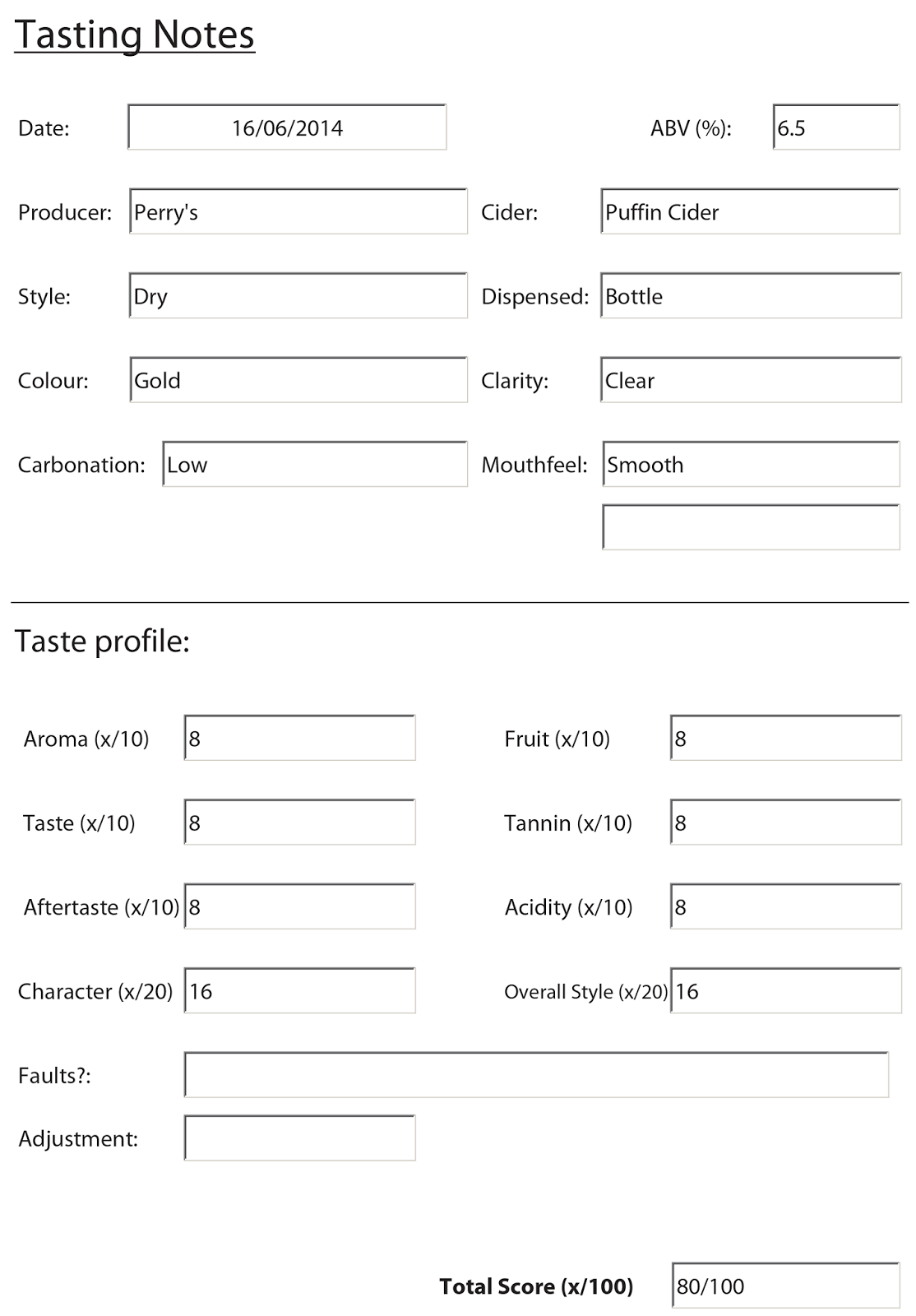 First off, may I humbly apologise for being absent for, well, a month.

However, I have been very busy. Not just busy selling cider to people... or busy winning a couple (or more) awards for my cider... (which is always great!). Lets face it, those are the things I want to be doing. Not even just doing a bit of judging of ciders... though that was a lot of fun! Nope, this is a little different...

You see, I have been involved in writing, consulting, re-writing, talking, meeting and finally getting a presentation for a proposal of a PGI for well made, traditional English cider and perry. Well, I have hinted at it no here for some time eh. And it looks like it has got some legs to it.

The aim for a 'Heritage English Cider/Perry PGI' is to showcase the highest quality cider and perry produced within England and set a standard for quality products way beyond the pretty loose regulations set by HMRC. It seeks to differentiate the good stuff from the lower juice, mass produced 'brands' and to create something that is recognisable to the public.

A PGI, or Protected Geographical Indication, is a device used within and run by the EU via DEFRA (in the UK). It sets out regulations and criteria for a product - essentially ensuring that traditional products and methods can be protected and promoted. Sounds just right for high juice cider eh! Beyond that, criteria for quality can be included within the PGI - well, it is true that both the best AND worst ciders in England are traditionally made, high juice ciders! (though I realise some may disagree with the 'worst' bit:-)

It all started some 12-18 months ago and has taken time to get to a point where discussions can be held with the National Association as well as attempting to consult with as many craft/high juice producers as possible. And now it has been presented at the Cider Trends summit in Bristol it is well and truly in the public domain.

The nuts and bolts are found in the 'infographic' below... well, when you are presenting to PR and marketing types it is wise to at least try and speak the language:-)

Done well, it could add value to high juice cider and maybe even encourage some to raise their bar a little. And it does all of this without throwing any toys out of the pram, upsetting the 'apple cart' and allows the larger family of cider producers to continue to innovate and/or do whatever they do.

With nearly 50 producers signalling their support for the PGI so far - and more looking at it (and yet to look at it), this process is not complete yet. However, it has dispelled the common opinion that cidermakers cannot agree on anything - or that we aren't organised enough to do something new!

There are so many reasons for applying for a PGI - reinforcing traditionally made cider/perry and separating them from the mass produced cider is one thing (it will only be when numbers of producers are using it that it becomes a recognisable and reliable indication). It is also something that cider and perry producers can pin their credentials to... without having to comply with silly 'definitions' and restrictions on parts of the process that, quite frankly, just end up misleading and confusing drinkers all the more!

And saying that, it is probably worth saying that this is a process worked out by cider/perry producers for the benefit of the drinkers. Of course opinions are always welcome from anyone; its just that the opinions that will make a difference are those of producers.

There is a lot of work still left to do - but hopefully I can at least get back to the ciders and perries - after all, the drinking is so much more fun than the talking! I will post more detailed information as I am able.
Posted by Thoughts on cider... at 12:00 2 comments: