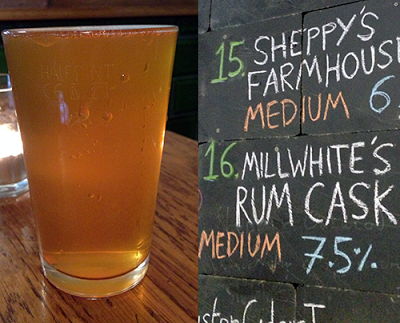 Millwhites are a cider producer who loves using different techniques - or should that read types of barrel?! Rioja, Whisky and now rum cask.That said, it is not bad cider to start with - so I figured (temperature aside) I was in pretty safe hands for this next cider.

With two bronze apples to their name (I have already tried the cider prior to writing this post), Millwhites are definitely well above average, full juice producers who don't tend to muck about with their cider (apart from the casks bit). So I am keen to see whether this is 'hint of' rum or full on rum.

Of course, it is now well known that Her Majesty's bods have a suspicious view of spirit casked cider. Apart from oak, it shouldn't be a big deal; either in terms of flavour or raising percentage vol. I think this is a bit of a shame - as much as not being able to use honey in a cider (traditionally called a 'cyser') without attracting much higher levels of duty. To some degree it puts off innovation... though that hasn't stopped the 'fruit' brigade (who technically shouldn't call theirs cider at all).

Anyway, onwards with this one... I may even try to leave this alone for 5 minutes in order to let it warm up!

At 7.5%, this is a full strength cider which is very cloudy and nicely golden. Now, I don't mind cloudy, but this its a bit sloppy. End of the barrel stuff really. Cider should settle clear - that is what you want from an unfiltered cider: clear. Not cloudy. Hazy is OK and some ciders don't get beyond this. Bright is a brewing term and I shouldn't really be able to call a full juice, unfiltered cider bright. However, it is a sign that it hasn't been played with too much.

It is still and medium. Perhaps that is why I left it for a while. After all, there is medium and there is MEDIUM! Having left the chilled cider to settle and warm a little, it has a really fruity nose to it. Quite western in style, but no sign of the rum. Just a nice cidery smell.

There is some rum in my mouth though. Not stacks; this is a full bodied cider with a lot of fruit and a little acid... an too much sweetening. Sorry, have to come back to this. At the end, the sweetening is really funky. I ony know of one sweetener that does this, and that is saccharin. It gives the end of the drink a 'squash' like feeling (that is, how squash used to taste when I was a child and it was sweetened using saccharin). It makes the cider taste like squash to me. No no no no no no! Millwhites. Lose the saccharin. Just because people have used it for the best part of a century, some traditions are best lost!

So, its a nice cider that ends up like apple squash. And its still too sweet. Overall, the acid dies to virtually nothing, although the aftertaste is very long and sweet. All the while there is a low level rum running through it, which works.

This may sound a contradiction but I like this cider. I am just a bit disappointed with the finishing flourishes. It scored another bronze for Millwhites at 72/100 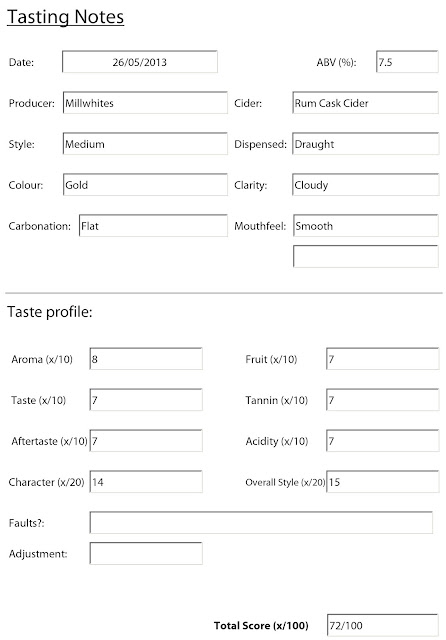