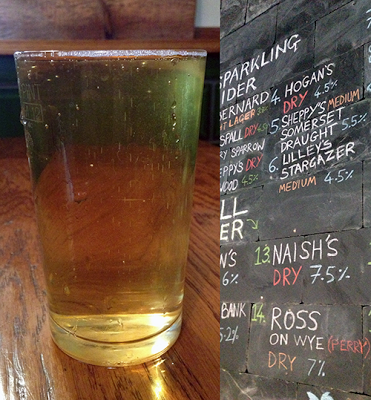 I probably don't get to London as much as I used to. In the days when I was 'on the road' selling stuff I would have a region outside of London (I am not from London) but would end up picking the area up from time to time. I like going to London and I like leaving just as much - it is a busy, stress filled place most of the time - but the history and atmosphere is one that needs to be experienced... I guess it reconnects you to a sense of British-ness (whatever that is)

That is probably the best write up London has had from me. It was meant to be an introduction for having made he trip back to the Cider Tap. I don't make special trips just for the Tap, but as the trains out are unbearable from about 1630 to 1800 it is worth sitting through it drinking cider. Having said that, the choice is starting to run out a bit so I may have to spend a rush hour in the Bree Louise next time (or, dare I say it, find another cidery location).

First up is this Hogans Dry Cider. It is a new addition for them, although having visited their website to confirm its proper name find it is called a 'Draught Cider' and also medium dry rather than dry. It comes to me in a half pint glass, golden and ever so slightly fizzy. To be honest, drinking halves of cider is definitely the way to try new ciders (especially as they can be a little hit and miss when you are exploring 'new' ciders!)

I do need to point out that the Cider Tap serves it's ciders too cold. My own general rule is that the dryer the cider, the warmer it is - with dry being room temperature and sweet being chilled (rather like a sweet white wine). However, possibly thanks to the 'over ice' brigade, people prefer their cider cold (I guess it's like demanding a crisp, crunchy and shiny apple...) Shame really as I think it has tainted a few reviews done at the Tap!

Anyway, back to the cider. As mentioned, it is light golden and slightly sparkling (it is in their sparkling list, so it should be a little at least!) I am not sure how the ciders come to be sparkling, as they are served from the tap. Could this be a 'keg' cider? (don't tell CAMRA!!!)

It smells very light and a bit appley - the coldness of the liquid stops it from being more than that. There is a tannin to the smell too, which comes across as an industrial, petroleum hint. This smell comes from some of the heavy duty bitter apples - I have noticed it more from bitter sharps than bitter sweets.

The taste is actually rather watery, which is a shame. the sparkle is gone by the time it hits the taste buds, and it is very refreshing. It isn't very dry though - which must be because it is mislabelled as dry - but the wateriness of it doesn't help. I am getting a moderate sharpness to it, with a reasonable tannin which fills the body. However, don't expect a really complex cider - this isn't that. Given that it is 4.5% I am prepared to stick my neck out and say it's been watered down.

The aftertaste is, as expected, short and a fairly safe mix of acid and tannin.

Overall, I find this a pleasant cider - not great, but pleasant. If it is kegged then it isn't a bad kegging... though I would prefer a stronger profile which is a bit more original than this 4.5% version. I suspect it might have scored a little better if it had been a bit less cold - though that wouldn't really have affected things too much.

A score of 67/100 sees this Hogan's just shy of an apple. Its not bad at all. Just a little mainstream for me perhaps. 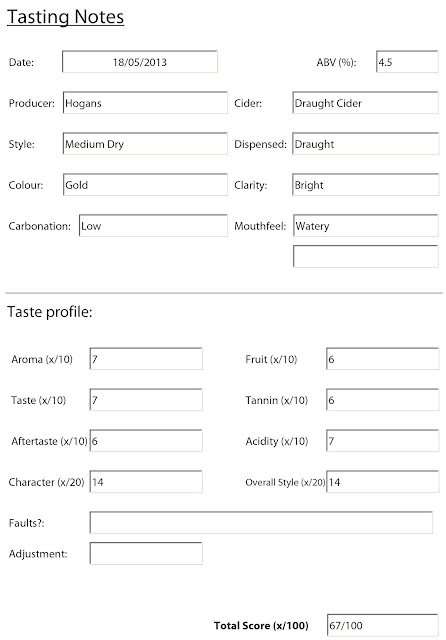 Email ThisBlogThis!Share to TwitterShare to FacebookShare to Pinterest
Labels: Hogan's