Goodness me - that is one heck of a mouthful! Not satisfied with this being a limted edition, vintage (and, by the way, 2011 is plenty old enough for a vintage for me:-) it has to be a couple of cracking varieties melded together into a vintage. So it has style before I even taste it. Not so sure about the Golden Years bit... never mind. You should see what some of my cider gets called!!

Now, this was meant to be a review of a 'Rogers' cider that I tried whilst at the Cider Tap... it was meant to sit alongside the Millwhites review. However, I changed my phone and forgot to sync my notes and scores on it! Ah well, if I can access the back up I will retrieve it and put it up as its worth it (I think). Mind you, that could just be desperation as the next cider on the list is the (by now) infamous Carling 'British' Cider. But lets get into that one when we do.

I bought this cider d'rectly from the maker. Well, as in I stopped by and went into the Rich's shop. Nice it is too. And they have a cafe, which kind of makes it worth your while going out of your way for it. They make several of these 'Golden Years' vintages; I bought the lot and will be going through them for the sake of research!

This one pours out a lovely dark golden colour, with a foamy fizz. It looks bright, although I cannot really tell if its been through a filter. If it has been filtered, it has been done gently (though there is no reason a well kept vintage shouldn't be clear/bright like this.

The smell is woody - the typical Yarlington smell. Its very nice indeed, and a tiny bit smokey too, which to me is a sign that it is a vintage. The woodiness is also a bit floral too - well, apples are a floral fruit eh!

The taste is great. The earth/wood/floral notes remain and there is a good measure of tannin in the drink. I would say it has been sweetened to a medium dry (It doesn't say on the label what it is, so lets just go with medium dry!). Yarlington Mill is a funky apple, moderately tannic and no real acidity to it. It has a distinctive taste that I am getting tons of going on in this drink. Its a real cider lovers drink!

The Lambrook Pippin is not lost in here either. I am a lot less familiar with it and its taste, although there is definitely another variety competing rather well against the bold Yarlie. I have the Lambrook down as a mild sharp apple (note that Ashridge pitch is as a duel cooker/cider apple). It is an interesting acid and balances well against the Yarlington Mill.

The aftertaste is long and delicious. The only shame about this is that I only bought one bottle of it! Ah well, I am off to Royal Bath and West this year so will have to 'divert' once again on my way home!!

A score of 81/100 sees this Rich's cider with a silver apple. That makes it two silvers and a bronze for them so far on Cider Pages... they are creeping up the league table of my favourite Somerset cider makers! 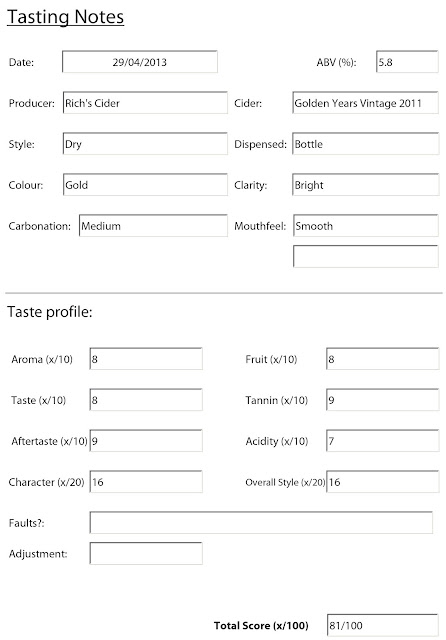