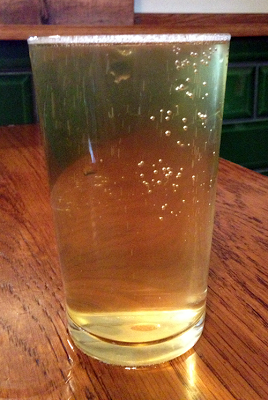 Pre-warning to this review: it has been suggested that this review is not as accurate as it ought to be, due to the temperature it was served at. As it was an issue, I would be willing to go along with that and so, as soon as I can find a bottle, it will be re-reviewed.

If I find differently I will remove this review as being unhelpful. Cheers, Cider Pages

An Aspall cyder that I haven't tried!!! Well, as it is on draught at the Cider Tap (it isn't currently a part of their bottle range... yet) it has to be tried!

Why Harry Sparrow though? Is this some mythical agricultural myth, like the Green Man? No, well, I guess it could be - just depends on who you ask! Harry used to be head cidermaker for Aspalls during the 20th century. This cider (sorry, cyder) is made in tribute to him.

It is described as: "Mid golden to amber in colour, Aspall Harry Sparrow is a full bodied medium dry cyder that has a wonderful fruit aroma with floral and cedar wood overtones." Looking at the website, it mentions Kingston Black and Medaille D'or - so there ought to be some tannin to this, which is unlike many other cyders Aspall make.

And so, this 4.5% cyder is poured out - too cold, light golden and bright - with a low level fizz that seems to be quite persistent. It has a very floral tone to its' smell - perfume and a little sharp smelling. The coldness kills most of the smell though (are you getting the hint yet, Cider Tap?)

Now. The taste is a bit disappointing. It is rather too sweet - there are low levels of sharpness and I am getting the tiniest amount of tannin in the flavour, although this is lost almost as soon as it is noticed. It feels tamed (and again, as with the Hogan's, it has been dropped to a mass market 4.5%).

If I really concentrate on it (without looking to weird in a pub that is fast filling up as people leave work for the day) I get the floral flavour to go with the smell. It is still quite eastern style and has a bit of a kick to it. This 'kick' is so small it may as well not be there though.

The aftertaste is short in length and not particularly inspiring. I have to come back to the temperature once again though. This cyder is on the sweet side - I think it should be chilled a bit. But not this far; and this cyder is probably quite ethereal in its character so would need more of a chance to be tasted properly. OK, perhaps I am being a bit snooty -  but give the cyder a chance... it doesn't all have to be arctic!

I personally think that Aspall may have missed the mark on this - and an opportunity to make a really stunning, full juice cyder in honour of a man who seems to have loved the French methods of making cyder - that would have been a great drink to try... but Aspall wouldn't be capturing a mass market with that so we get a 'diluted' version that just doesn't really satisfy.  It comes across as a tailored cider that suits undeveloped taste buds - it leaves me short. And that is a shame.

With a score of 62/100 I will be sticking to Premier Cru and Organic. 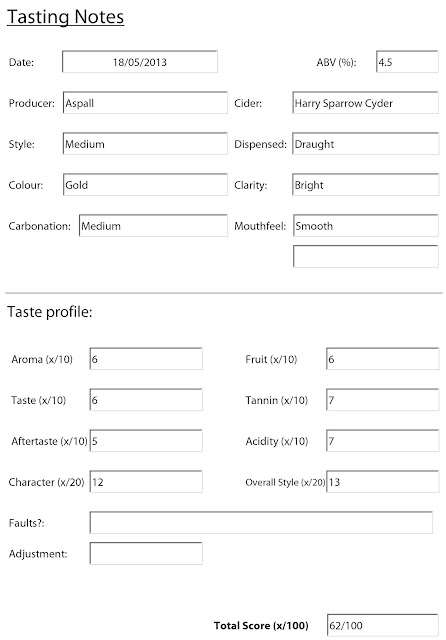 Email ThisBlogThis!Share to TwitterShare to FacebookShare to Pinterest
Labels: Aspall