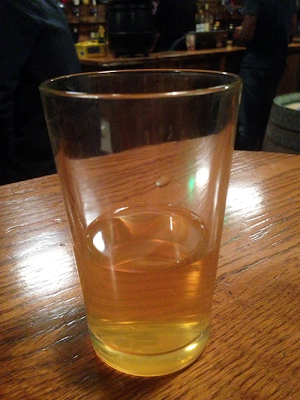 The amazing case of the disappearing review has been solved. Well, actually I figured out how to access my old phone and pulled off my notes. But that isn't half as impressive as the first statement!

So, going back to my trip to the Cider Tap in London, my second cider half of the evening came from Dorset. Rogers Cider is a small producer just north of Bridport. Making cider from their own fruit - almost wholly cider fruit.

As you can see from the photo above, I failed abysmally on the photo opportunity. However, as you can see from what's left of the cider, it is quite clear and golden. I am conflicted as to whether to call it filtered or not, but it does actually look pretty good.

I am not getting much from the smell, though it does smell a little young. It is still surely too soon to be drinking the new years cider (bearing in mind this was at the end of March).

It tastes quite young too, though after a bit the tannins do develop in the mouth. It is quite a sharp cider overall though, with a good acid body and a fairly light tannin. I suspect this comes from using all cider fruit though, the sharpness and tannin do match each other... though I fear its a bit too bitter sharp.

The aftertaste is actually rather drying and puckering - even though the cider is not that drying in the taste. I do quite like it, though a half is enough for me for now. If it is a young cider, I think it needs more maturation to be great. Curiously, I expected this to similar to Dorset Nectar who (by the use of Google maps) appears to be just down the road. It is really rather different... which is surprising.

With a score of 71/100, Rogers earns a Bronze apple. A few more months of maturation, it could do much better! 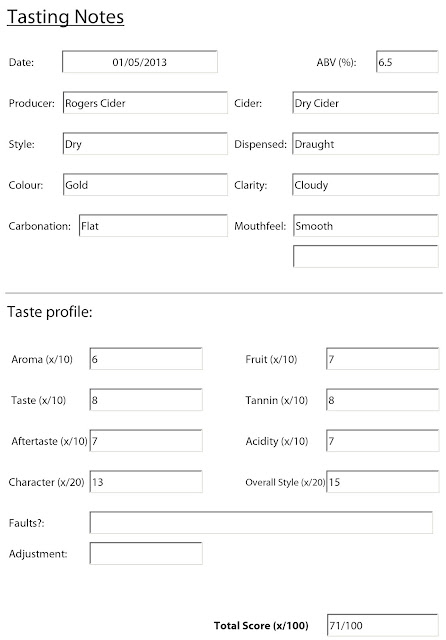