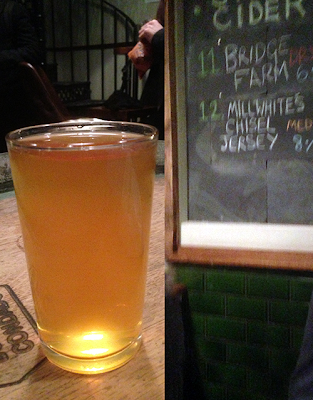 I know, I have only just finished a bunch of draught cider reviews and now I am on to more. And to be honest, it isn't strictly my thing - I don't get out enough for a start! But occasionally, I do and on another business trip to London I get a chance to visit the Cider Tap once again for another couple of halves before boarding a train home again.

Whilst much of the board looks the same as the last time I visited, there were a couple that got my attention - with this cider from Millwhites being the first. It isn't that I have come across this cider before, more that Chisel Jersey is an apple that I have a little of experience with. The other notice worthy thing about the Tap on this particular evening was that it was actually really busy! Not as busy as the Euston Tap across the road, which was over flowing to the kerb, but it was either perch at one of the barrels in the middle or hover around the bar. Taking photo's of cider in a pub makes me look like some kind of 'ticker' in any case, but in the middle of a tiny, crowded pub was always going to catch some attention!

Going back to the apple variety, Chisel Jersey hails from Somerset (all Jersey's do). It is a late bittersweet apple, which generally means its a reasonably heavy apple - my own tasting experience informs this too. It is another one of those early 19th century apples - why did the majority of apple cultivation happen at that period, often done by people passionate about apples. I am interested in what it turns out to be like. I couldn't get sufficient of them last year to make even a gallon of single variety, so this could be my surrogate for that. However, given that its on draught and I have limited time to give it, I am not going to make it a cider 101... that can wait for a bottled version:-)

As you can see from the photo, this cider is golden and quite hazy. It is also flat and rather a heavy hitter at 8%. The smell is gentle in the nose, but full of fruit and orchard - deep and tannic. I am expecting it to be full bodied and heavy.

It does have a full body, but not in a heavy or sluggish way. It is almost orangey to the taste, with rather more acid than I expected. This acid lifts the tannic body and, together with the sweetening, it is only a touch puckering. The orchard-ness remains and comes across as a musky note in the cider. As I sit with this drink, there is rather more acid and rather less tannin than the apple warrants, though it isn't classified as a vintage, so that could just be how it turns out.

All this without mentioning the sweetening, which is a touch too heavy - though probably not beyond the medium label. Mind you, it does dumb down some of the more interesting flavours.

The aftertaste is moderate to long, with quite a punchy tone to it.

I rather like this cider. Its not the best I have ever tasted but as a medium cider its not at all bad (and better than some of the others on offer at the Tap! A score of 71/100 earns a bronze apple for Millwhites - albeit a light one. 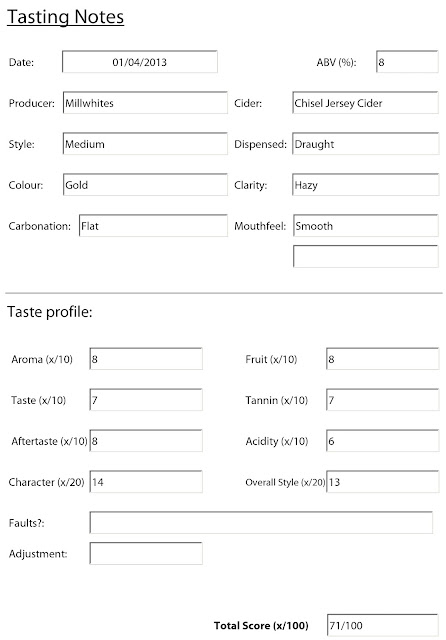