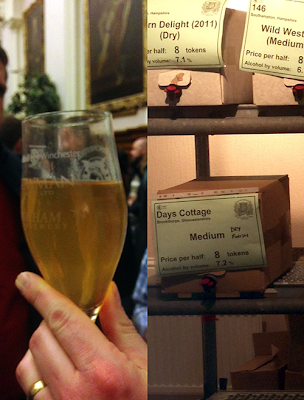 Time for another half. My mates had gone off in search of something hoppy so I figured I would try something different. A medium this time (although someone had scribbled in tiny writing that it had a dry finish). As had become the norm for this festival, I opted to ask the advice of the barman – or lady this time. “It’s pretty good… not that dry though”.

Making cider out of Gloucestershire, Days Cottage aren't just a cider maker - they make award winning apple juice too (that's the stuff like cider but without the %!). Not only that, but if you wanted to learn rural skills like hedge laying, grafting and budding, then they are the place to go.

Now, this cider is hazy and golden. As expected from Gloucestershire, it has a good full-bodies smell to it that had plenty of flowers and farmyward in it. Rough and ready, I guess you could say. There was also a slight ‘cheese’ coming from it… which whilst not off putting seemed a little out of place.

Sure enough, this was a medium cider with a dry finish. The cheese had something to do with the drying of the finish, although it only really came out after the rest of the flavour had ended. This is a fruity and tannic cider, with some acid (though the tannin is the winner for this cider). Its rather nice actually, and quite alcoholic tasting too. The cheese is odd, I guess it must either come from the fruit varieties or else be a slight storage problem… again, it isn’t putting me off enjoying this cider.

The aftertaste is long. It’s the tannin that makes it dry – there really is plenty of it… a funky fruitiness which you sometimes get from a full on bittersweet cider.

A well deserved bronze apple for Days Cottage – although if I want cheese with my cider I would prefer to have it separately:-) 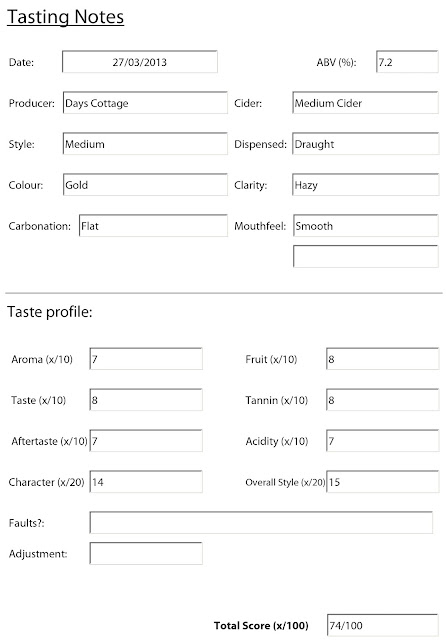