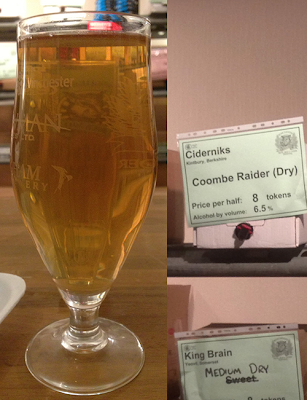 Another review from the Winchester Cider and Beer Festival... and what to go for next? Well, as there was quite a lot I had yet to try I figured I would go for something a little different. Ciderniks is one of the upcoming small cider producers based in Berkshire. Saying that, whilst I have heard of Coombe Raider previously I have never actually come across it before.

One comment about this particular cider bar - I am very impressed by the number of dry (or dry-ish) ciders on offer. I almost feel spoiled for choice.  Its not that there are hundreds of ciders on, just a decent variety including more than a token nod to dry ciders. So, a good cider bar... and some pretty good music too!

Now, this cider is quite clear - I am not sure if it has had any filtering or not. However, it looks deeply golden and still. I am getting quite a faint smell from it; again its likely to be because it is a still cider at room temperature.. there is apple going on though (as you would expect). I am also getting a little ascetic from it too.

The taste confirms this, though it doesn't detract from the drink too much. A bit like 'old cider' it seems a little oxidised. There is plenty of fruit taste here and it is tannic as well as acidic (mind, the acid is the bit that comes across as ascetic, so it does drown the tannin just slightly more than I would like. In all, this is a fairly light cider, and I am not sure whether it's going for west country or eastern style... I think more likely its just doing its own thing!

The aftertaste is very pleasant - it is long and delicious and the oxidised bit of the taste wanes away. The tannin stays on though which leaves a pleasant hint of the cider.

Now, I haven't scored this cider down for its ascetic quality. Partly because I am not sure whether it's just been badly kept or bagged like this. It doesn't detract from the taste either - rather adds another interesting dimension. However, I would have preferred it not to be there. So in all, this cider scores 74/100. A good cider worthy of a bronze apple (in my opinion). I am sure it could have got more. 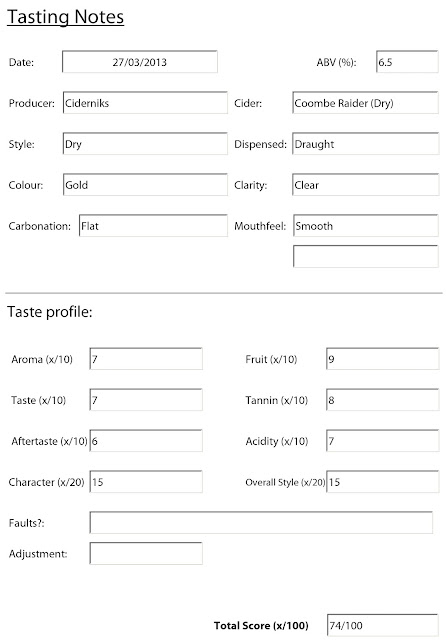