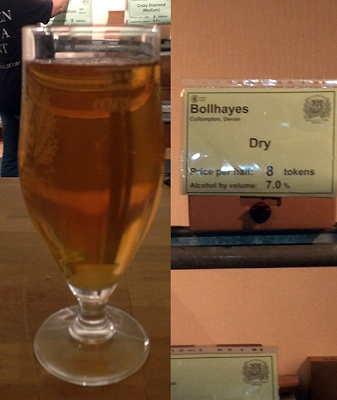 Turning to Devon for my third cider – its worth noting that this festival isn’t just the Herefordshire/Somerset fest that I have seen quite a few times – although clearly the cider mostly comes from Hampshire (of which I have tried all of them that are present here – with the exception of the Perrys (which aren’t cider) and the Strawberry Cider (which isn’t cider either – and not entirely sure what place it has at a CAMRA event… another fine example of APPLEs power and might at branch level).

Now, I know a thing or two about Bollhayes without having to trawl t’internet. The owner, Alex Hill, is also the owner of the largest supplier of cider making kit to the cider  making industry (well, the full juice bit of it anyway).  And if you ever want to witness ‘cider-porn’, take a look at his Vigo website (make sure it’s the professional’s website as opposed to the hobby site). It teases you with large machinery and as with this kind of thing leaves you hanging as there are never any prices!

And now I have been sentimental and complimentary (I think) I should try his cider! It is fairly clear and golden in colour. Naturally, being draught, it is still. However, there is a bit of a fruity smell coming off of it – alongside what I have described as an almost detergent smell. I have no idea what this might be, and it could be something not in Bollhayes control…

The taste is moderately fruity and tannic, although the one thing I would say is that it is brier sharp! I am not sure that you could cut yourself on it, but it is close. There is good tannin along with it, but this is not a balanced cider in any respect. I expect this is made from just cider varieties – though the bittersharp/sharp fruit seems to have run a coach and horses through the bittersweet.

It is a little puckering, but not in the way that other ciders, generally Bramley-esque ciders, are sour and sharp. This is drying. The acid and tannin working together to suck every last drop of moisture from out of your mouth. The aftertaste is, therefore, long – although as it is dry the natural reaction is to drink some more… and round we go:-)

I am not 100% sure about this cider. It is well put together and has character, but after half a pint I was more than ready to move on to something a little less, well, challenging. 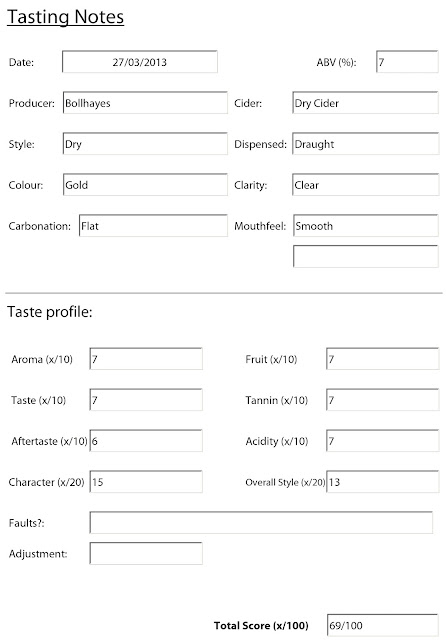 Email ThisBlogThis!Share to TwitterShare to FacebookShare to Pinterest
Labels: Bollhayes