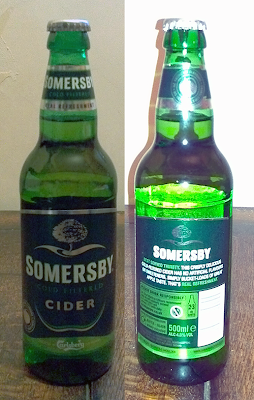 There has been a little bit of a fanfare about this cider online... no, not from the #ciderarmy (as I think they are called) but amongst the PR and marketers of the world. Something along the lines that Carlsberg want to get on board with a cider and add something to the market place. Brand managers wet dream no doubt. Personally, I guess I start from a position of being surprised it isn't being sold in a can:-)

OK, with a more objective head on, I notice that this bottle says it is 'made in Herefordshire'. Who by? I suspect it is a part of Carlsberg UK as opposed to a cider maker, and I do recall driving past a rather industrious looking site a while back which had some name like UK Beverage (or something like that). A search online reveals that it is a subsidiary called 'Bevisol'... I can also now see from their website that this is sold in both can and bottle (answering my question above). The website also bangs on about 'refreshment' and claims that their cidermaking team have over 120 years combined experience. So is that a team of 2 with 60 years or 1000 who have been on a training course?

OK, apologies about the flippancy. I just find it amusing when marketeers and PR people try to spin some kind of authenticity and tradition together... humankind at its most deceitful and, sadly, most obvious.Lets get on with trying this cider then. I am clearly expecting this cider to be the polar opposite of what their marketing department say. After all, its Carlsberg right? Its sold en masse in competition with Stella, Bulmers and Magners... So, if Magners is 'pressed in the dark' (probably not a bad thing for them!!) then Carlsberg being 'refreshing' (whether chemically or otherwise) is just par for the course.

At opening, the cider is foamy settling down to a persistent and moderate fizz. It is slightly golden, although to be honest looks more translucent than golden... the smell is of apple sweets; juicy and sugary. I am not really getting anything particularly deep or individual and am even considering dulling it with some ice!

The taste is, well, interesting: apple squash is the closest I can get to it. Fizzy apple squash. It is more than just a touch watery in the mouth, although the sweetness does give it a little body. Unfortunately, it is a ghost of a cider - light, faint and... well, a touch cardboardy!

The aftertaste is very short and nothing really screams out at me. I am left with the feeling that I am not sure what this drink really is... and I am honestly trying to be objective! In a punch up between this and Magners, I would take the Magners. If it were with WKD I would probably take tap water.

I think this cider is a lesson in the fact that you cannot necessarily create cider in a laboratory. The score is 45/100 (and I feel that is being generous). If it were only available in a can, I wouldn't have had to try it!!! I notice that Strongbow is in bottles now too... though I refuse to buy 6 of them so am safe for now! 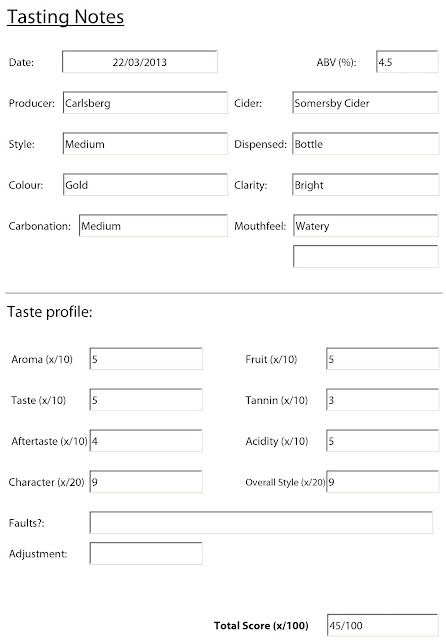 Email ThisBlogThis!Share to TwitterShare to FacebookShare to Pinterest
Labels: Carlsberg