UK - The State of Cider – An Unofficial Report


I thought this was quite a neat title. Without wishing to boast the UK is currently the ‘State of Cider’: It consumes more cider than other country in the world. The question is, what state is the ‘State’ in? This is just a perspective from the craft end of the market.

There are annual reports out there that generalise the cider outlook for the UK. The most easily accessed is commissioned by the NACM (National Association of Cider Makers). Other bodies and journals also take a view – though these often just back up or give credibility to a particular point of view. Take the recent headline, ‘Cider is outselling lager’. Quite honestly this is not at all true and simply serves to prove that there are lies, damn lies and statistics. However, let’s have a look at the industry from the perspective of it’s main body: 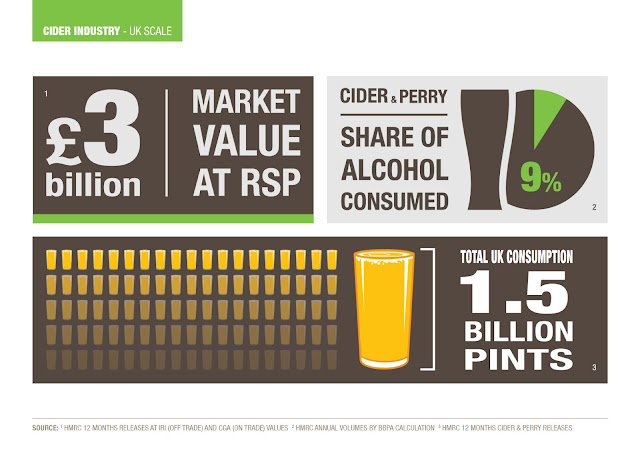 What conclusion can be drawn? Cider is in a healthy state. And that is a good thing for the industry; both craft and industrial. This also demonstrates that marketeers and soft shoe shufflers have done a damn good job over the last decade or so convincing drinkers that cider is watery, apple ‘flavoured’ and sweet. Less than 1% of the cider sold in the UK is made by using 100% freshly pressed juice. In any case, these figures don’t really take into account the full juice sector - the craft sector is rarely studied, and if it is it’s merely ‘assumed’ to bolster overall figures. So, while this may mean something to Bulmers, I am not sure that the person seeking real cider is any the wiser. However, there is a way that you, as an individual, can get the real picture of cider in the UK and it’s rather simple. Here is an exercise for you:

Go to your local supermarket. Not a garage or pub turned supermarket but a proper one. Look at the cider section and what do you see? (Comments are allowed and I am interested in the results!).

Here is my local Sainsbury’s: 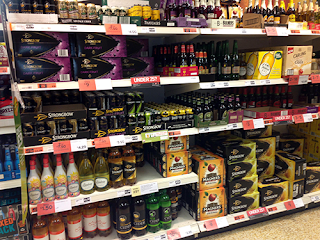 OK. Lots of multi packs. A few plastic bottles (you can tell these are going out of favour - bottom shelf at the poor cider end). Heading towards the end of the aisle we have what Sainsbury’s think are the premium and more individual ciders: Starting with the various flavours of Koppaberg and Reorderlig and ending with a couple of Orchard Pigs, some Thatchers, Westons and a Henney’s or two. How much of this is full juice do you think? How much of it is sourced locally – or produced locally? 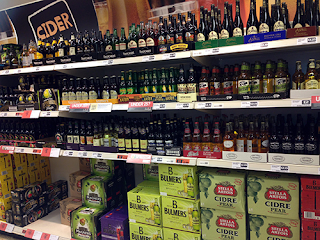 Now, I happen to live near to the Sainsbury’s that wins (or used to) awards for its alcohol selection – so I am more fortunate than others in range and choice. However, from what I can see I would only reckon that Henney’s is full juice… possibly the Orchard Pig too, though these days I am not convinced. The best of the ‘Heritage’ brands are 70% juice content at tops (if you want the highest, go for their Vintage versions). Taking a step back and including the heritage brands – Thatchers, Sheppy’s, Westons and Aspall - as being better and more individual/traditional than the rest,  how much space is given to proper cider. I would suggest certainly less than 10% of the space for cider and probably around 1% of total alcohol space (there are 4 aisles of alcoholic beverages in this shop). Most significantly, I bet there are no local producers represented either (OK – if you are in Waitrose and have found one then well done, it can happen).

And there you have it; an easy and objective view on the state of cider in the UK. You will have taken part in an objective experiment although wherever you live (even in ‘Ciderland’), what I have described will be the state of your supermarket shelves. Oh, and one more comment if you have the time. Look at what people are putting in their baskets. This is an abject lesson to the fact that people really do swallow the marketing that is thrown at them. So although the latest Magners advert is dishonest by having some old fashioned Irish yokel wandering around young people telling them (and us) that Magners is authentic – and the Somersby advert that mocks Apple store nonsense (and, by the way, says nothing at all about cider) – people do suck it in. Its not about authenticity. These things are about image – and they are masters of that!

So, the UK cider market is buoyant and full of choices – the vast majority of which have very little to do with actual, traditional, apple juice focused real cider.

CAVEAT: Yes, there is a growing number of farm shops, specialist off-licences and outlets for real, full juice ciders. These are the real bastions of alcohol. If you really want my opinion about it, I believe that the key to dealing with 'binge drinkers' is to cease alcohol being a commodity and move it out of the supermarkets to more specialist outlets (such as pubs and off licences). You will get proper oversight and management whilst stopping it from being just something else that gets thrown into the shopping cart without a thought. However, that is another post eh!

The next time someone says that cider is doing really well – consider that they are talking about the shareholder driven cider by and large. The rest of us just ride on the shirt-tails. Oh, and don’t forget to keep an eye on those supermarket shelves. As Billy Connolly once said – if you want to know the weather, look out of the window!
Posted by Thoughts on cider... at 12:00