Adventures in Single Variety - Reviewing my own (part 3)

I think this must be the final 'Adventures in my own single variety ciders' to post. Thank goodness, all that self gratification was starting to rub off on me... and heaven's knows there are enough people trumpeting every and any thing out there without me joining in! The bottom line - the REAL bottom line is whether your cider is any good... not how much you can make your voice heard!

As far as blogging/reviewing goes, there are more people taking up the cider gauntlet from around the globe now. This is good, as it means that while I can try ciders from other countries, readers can hear what native cider drinkers think... this is positive as I may not be the best person to recommend something. OK, I do like my cidre... proper French cidre is something to compete against (in terms of quality, flavours and style). However, I am best placed (personally) to talk about British ciders. Not that I wouldn't give a hard cider, sidra etc. a good go:-)

Anyway, in this final comparison I want to look at two of the big hitters. Without doubt these two varieties have been turned into the most single varieties (perhaps with the exception of Dabinet). Whether this is because they are meant to be the most balanced or interesting flavour, or whether it's because there is a lot of them around and producers are more likely to get access to them, I do not know. Yarlington is very widely planted - as is Kingston Black, but no more so than a few others that don't make it into SV's often. Michelin, for example. 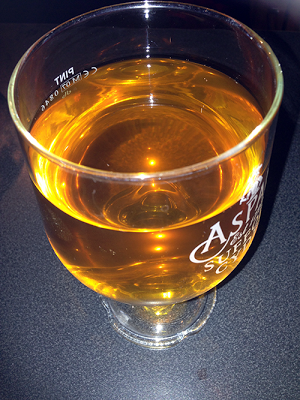 
Where to start? Well, I started by looking at Kingston Black. This is a mild bittersharp apple and is reported to have the best balance of any apple for a single variety. I am still not sure I agree... mind you, I think any single apple is better than a blend of apples!

I have been very fortunate with these bottle conditioned SV ciders. They have all dropped clear and sparkling. Nice! See, it can be done naturally without filtering etc. I had noticed that the Kingston was sitting in some heavy lees (dead yeast - once yeast has finished it's work, it dies and drops to the bottom). This one has dropped more in the bottle and, unfortunately, I am not smart enough to pour it gently enough! So it's a bit yeasty.

Asides this, the cider is very deep gold in colour - almost a rusty shade. It has quite a woody smell to it too - although I am getting a little yeast off the smell. There is a hint of some acid, but it is very fruity... almost a faint lime smell.

The taste confirms there is a bit too much yeast in suspension. The acid is quite understated, and doesn't interfere with what is actually a gentle cider. The fruitiness is fuller than I remember from commercially available Kingston Blacks. The tannin is moderate but not too drying. I am actually quite surprised as to how balanced this cider is. The tannin is pleasant and not overpowering, the acid is straight forward - present but not to sharp and the fruit and cider components work really well together. Mostly, Kingston SVs are quite heavy, tannic and acidic with a drying aftertaste.

The cider this was compared against, the one reviewed for Cider101, was Gillow's Kingston Black. I think, in reflection, that perhaps I was a bit harsh on it. This is very much like the Gillow's cider - light and gentle. Perhaps those that are bold and big are the ones that are on the odd side of things?! Nevertheless, looking back on the Gillows review now there are striking similarities to my own... and so I have learned something important from this exercise! 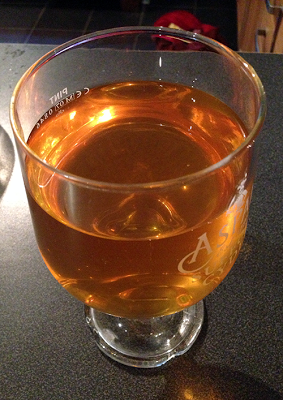 My final own single variety is Yarlington Mill. I love this apple. Not just because it is a generous tree, but the colour of the cider, taste and moderate tannins make this a real gent of an apple. My own version was late to bottle this year, so I am dubious about the conditioning. However, the cider itself should be fully matured.

It pours out (without much fizz at all) a golden ruddy colour. Typically Yarlington. It is nicely clear (as with the others) and is just simply lovely to look at. There isn't a huge smell from it, but what I am getting is a very deep aroma. There is tannin in this thing!

It is a very fruity cider. No acid at all, but plenty of drying tannin. This is what would be described as 'bone dry'. It isn't just a dry cider, it is dry with tannin - doubly drying:) The fruitiness is blackcurrents, elderberries - Autumn essentially. And to finish it off it has a very long drying aftertaste.

I do think my own version could use some work. Perhaps it needed longer in the bottle, but the late spring this year has slowed everything down somewhat.

Anyways, this cider is compared/contrasted to the mighty Olivers Yarlington Mill. That one scored a whopping silver apple back in it's review and I recall I was impressed with it. The only draw back to it (for me) was the rum. However, you can see the comparison between the two - earthy, deep, tannic with no acid and a long aftertaste. The differences - well, I guess you could all it 'terroir' if you like, but my own Yarlies never saw Herefordshire... nowhere near.

On the whole, I think this has been a useful exercise for me. It has taught me to be a little more open minded - and as I approach my 300th cider review that is probably a good lesson to learn. It has also shown that although apples do grow in different conditions around the country, they do deliver similar profile to each other... generally.

And I don't have much more to say other than, at least I have 7-8 bottles of each of these single varieties left:-)