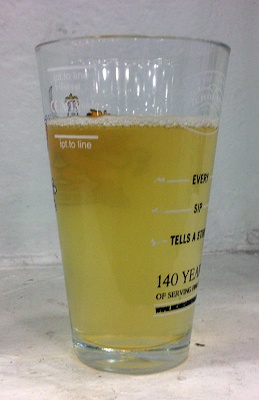 For my penultimate review from GBBF I leave the cider bar for a moment. Actually, I was stood by my post (where I could take photo's of ciders and write notes without worrying about being bumped and jostled). I thought I had tried most of the ciders made by Westons... but looking across the way I saw this one on the hand pump. A new Westons? Well, yes... I think so: worth a try anyway!

Rosies Pig sounds like it is described. An easy drinking entry level cider. Perhaps it's not going to win any awards but it is designed for drinkers to bridge the gap from alcopops to traditional cider. Personally, Old Rosie itself is, to me, an easy access entry level cider - but let's not criticise too quickly. I like the sentiment.

So, this is an odd choice for a review for GBBF. Yup. But it is here so it's worth trying. The 'pig' itself was apparently the first delivery truck for Old Rose - it was a pig to drive and a pig to steer. Nice. This is an excellent example of Weston's marketing team...

It is a pale golden cider, hazy on the whole and smelling slightly juicy and sulphity too. The haze... well, its all dead yeast put back in to a filtered drink (go on a tour of Westons and ask!!)

Now for a taste - Okay. Think Magners with a bit more body and you probably have it fairly well nailed. It also has a bit more acid to it as well. By comparison, it is a bit like a watered down Old Rosie too... with a little less haze too. It is light, moderately acid with a touch of unchallenging tannin - safe in fact. Did anyone expect anything different? It is juicy and quite sweet too - in fact, my own opinion is that it is fairly soul-less, but I can see the appeal for new cider drinkers

Rosies Pig fulfills its' brief quite well although to be honest it is not in any danger of being the best cider today. It is competent but feels a bit over specified. Having said that it is still better than some of their supermarket 'own brand' ciders:-)

A moderate score of 61/100. Would I recommend this to my friend starting out on their cider journey? Well, perhaps a pint but I suspect they would soon move on to something more intense and less industrial-like. 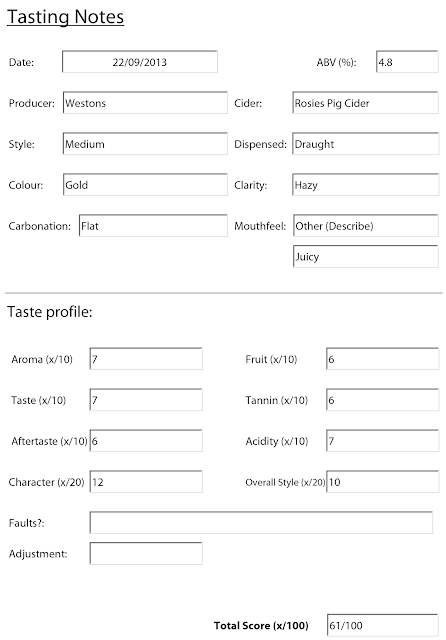