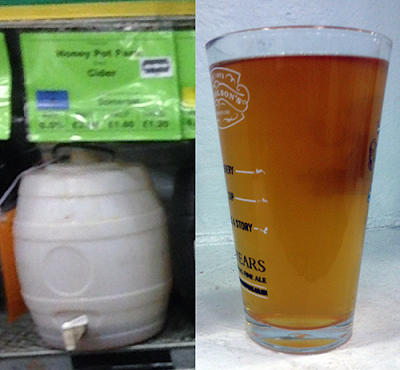 Trudging back to Somerset for my 12th cider. Well, not before taking a 30 minute break (or something like that). The place is massive and really well spaced out - although is the day has progressed the halls are much busier now. Some have come with hats... a couple of days early for hat day, but I guess they get themselves more noticed this way:-)

It does say something about CAMRA priorities that there are so many beer/ale bars and only one cider bar - well two if you include the ever present (and I suspect sponsored to the hilt) Weston's bar. Even Bieres Sans Frontieres - the bar dedicated to foreign beers - is larger than the cider bar in footage. Don't get me wrong, I like beer too, though if this festival represents the general thinking of CAMRA then it is no surprise why fighting for cider is rather low on their list of priorities.

I tend to drink beer when the only cider option is my own or something riddled with strawberry juice (or such like)... it has been known to happen and at that time I would opt for beer. It's not as good as cider by a long way though. Different... not as refreshing and sometimes just plain odd. Anyway, I do dabble from time to time. Getting back to my wanderings around the GBBF, I settled for a hamburger with blue cheese  this time - nice, though a bit greasy and I am not sure whether it will soak up the cider or simply make everything taste of blue cheese!

Back to the cider!

Honeypot Farm have been making cider for some years now (although there web presence is every bit equal to many Somerset cider producers... non existent. Sadly the internet and its benefits have yet to convince some producers to reach out online. Some habits definitely die hard! Anyway, it is marked up as being tannic... which makes sense... and is presented to me as a deeply golden and quite clear cider. Yum (so far!)

It doesn't really smell of an awful lot. I could put this down to having drunk quite a lot, but it was over quite a long time so my nose cannot have given up! I guess it's on the taste then:-) There is quite a drying tannin in here - it is as I expected it to be and is quite pleasant. Have CAMRA got this wrong? It feels more of a dry cider/medium dry at best and not the medium it is described as.

The taste of this cider is really very good. It has a deep tannin that stretches the pallette and lasts with a funky tone to it. You know, this may be the best cider in the house tonight. Its very nice. I am getting some acid in the background too. This is where the 'but' creeps in. I am feeling that slightly sour petroleum taste in my mouth again. It really isn't to my taste and only seems to come from Somerset based producers. Don't get me wrong, I like this cider a lot, but it just takes the edge off a little.

The aftertaste is dominated by the petrol taste, which is sad.

I wouldn't say this is a quaffing cider - not a cider for the faint hearted either... a bit challenging and not that balanced. However, not being balanced is not always a bad thing; character is important and this has a good character (in general). In a world where everything seems to aim for generic or ubiquitous, this sticks two fingers up at that! 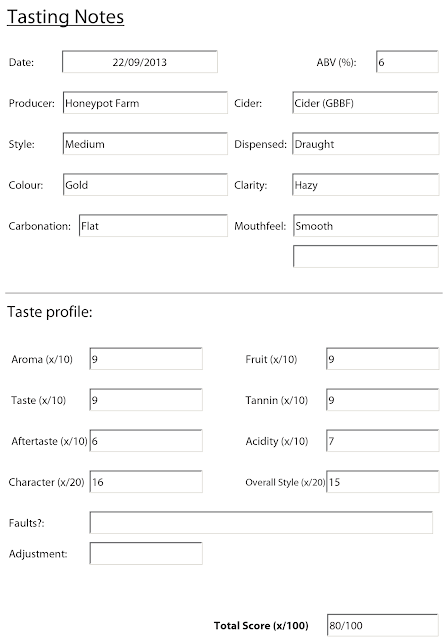