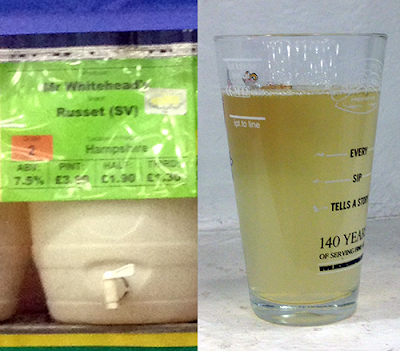 Its OK - there are only a few more ciders to go from GBBF this year:-) Being quite honest, this is far from being about the festival itself - CAMRA could have put more emphasis on cider and had multiple bars... they could almost run a cider festival in its own right alongside the beer version. But they won't. They will continue to gave at their navels and procrastinate; though I really do hope that one day they will prove me wrong and actually do something worthy of writing up on here! To be brutally honest there are a number of things that give the 'game' away:

1. Number of ale bars vs. the cider bar
2. Size of the foreign beer bar vs. the size of the cider bar
3. Descriptions within the brochure... contrast the detail afforded beer to cider

Thinking about it, you could take that list of issues and paste it into any CAMRA festival you care to; often adding 'cider bar stuck in the corner away from anything important'. Mind you, the selection of ciders available at this festival are pretty good (when you don't compare to the number of beers). So, on the whole, I remain positive about the GBBF.

One point I would make (whilst attempting badly to avoid a wry smile) is that following the festival, CAMRA APPLE found that only 15% of members realised that cider was represented by CAMRA... lets face it, who is really surprised by this. I just hope it has woken them up a little...

OK. Enough. On to the next cider. This is one that I wanted to try mainly because it is a single variety of an apple that I love, but is an unusual choice for single variety. It wasn't exactly on my 'to do' list as it is really a sweet cider that I could do without. However, lets give it a go and see it its any good. I confess to having a bit of a hit and miss attitude towards Mr Whiteheads - a bit like Tutts Clump in many ways. There are some good examples of cider and there are some poor ones too.

This russet cider is very pale (expected) and very hazy... cloudy in fact. Naturally it is flat being on draught but, other than the haziness everything looks exactly right for a russet cider.

Putting my cards on the table (a bit) I have to say that I have used russets for cider for a while. I really like them - they give a gentle acid to a cider. On their own, they should also taste a little nutty - russets have an interesting character. Come on... lots of producers try other ciders to see how their own compares! I have merely taken the additional step of blogging about it (which is either brave, sensible or stupid... I will let you decide!).

This cider smells, well, sweet. I am getting some nut in the nose, which I like - though it is fainter than I expect. This could well be the sweetening though.

OH MY WORD! This cider is killed with sweetening. Absolutely trashes the delicate flavour of the russets and I am not even getting much acid out of it even! OK, taking a small step back, there is an eastern character to it and while there is a bit of the russet charisma there it is smothered by sucralose to the point of almost being the equivalent to just adding sugar to a glass of water!

The aftertaste is all sucralose I am afraid - surely no one likes cider this sweet!! Sorry Mr Whitehead, I don't like this cider. I may even have to go in search of some water to clear my palette if I am to continue to drink any more cider! 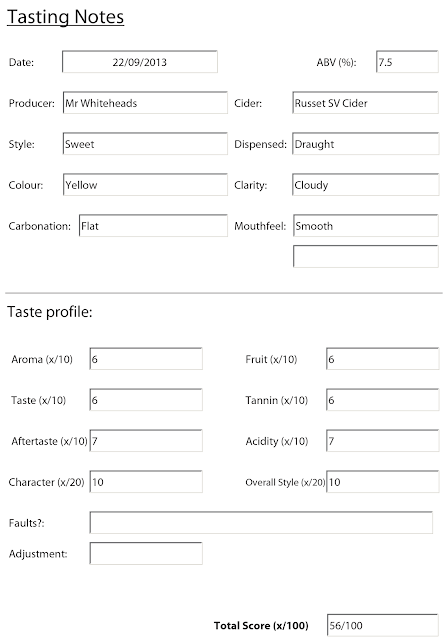