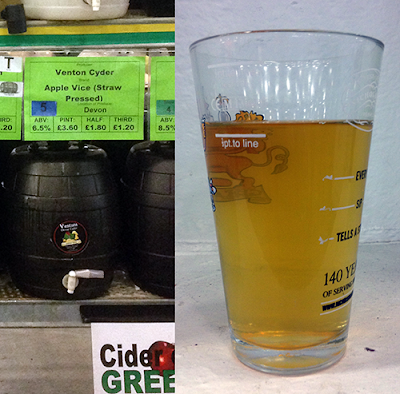 Moving on to my 6th cider at this years Great British Beer Festival, I thought I would continue on my to do list. This one caught my eye on the web list of ciders available - I guess it is obvious why!

For those who are not familiar with traditional methods of making cider, although these days we use hydraulic presses - with wood and cloth (often nylon) in 'the olden days' straw was a good container for pressing the apple pomace. These were wound by hand between the press plates... rather than pressing a button and letting the hydraulic pump take the strain.

These days, there are very few producers using straw. More often than not it is done as either a 'traditional' statement or just to be a bit different. I have been to the New Forest Cider open day in Hampshire and seen it in action - it is slow, cumbersome and a lot of effort. It is also not exactly the most hygienic means of pressing apples! However, the juice being pressed slowly is not always a bad thing - the pomace is in contact with the straw and interacts with it. It takes something from it.

My own perspective on straw pressed cider is that it will either taste great or bloody awful. Often, pressing through straw is the least of the 'traditional' methods - open vats, leaky wooden barrels, sulphite candles... if its going to be authentic it needs more than just pressing through straw... or does it?! I don't have all the answers, you know!

As well as being my 6th cider I think this is actually the 6th producer that is new to me. Venton's is a Devon based producer that uses oak barrels, straw and (as above) does things the 'traditional' way. Being sited near to where Whiteways used to be based, they are using orchards that I can only imagine are old and mature.

The cider is nicely golden and quite clear to look at. It also smells nice and cidery - nothing untoward here it is a full bodied aroma with a bit of fruit and lots of tannic cideriness.

It tastes quite mild and fruity with it. The straw clearly does make a difference to this cider as it is almost mellow in its character. One thing I am noticing is that whilst this is nicely full bodied, the tannin feels almost pulled out if it - it isn't really drying at all - although it is definitely there. I am also getting a touch of ascetic - very slightly vinegary. This is what I fear from straw pressed cider - although this is only a touch wrong and doesn't make the cider undrinkable at all... just a shame. It is a unique tasting cider so yes, finding it is a real shame. I have to say that I didn't mark it down for the fault, but I guess the score reflects it a touch.

There is some sweetening in here but it tastes its medium dry given by CAMRA. Nicely sweetened. There is a medium length aftertaste which does allow the off taste to develop a bit.

This is a nice cider with a good tannin and body - the acid is really nowhere to be seen - so it is possible that this could have allowed the problem to manifest itself - that or polybarrels!!

The score is hit a little and so Ventons falls just shy of an apple with 69/100. I will look out for more Ventons for sure!! 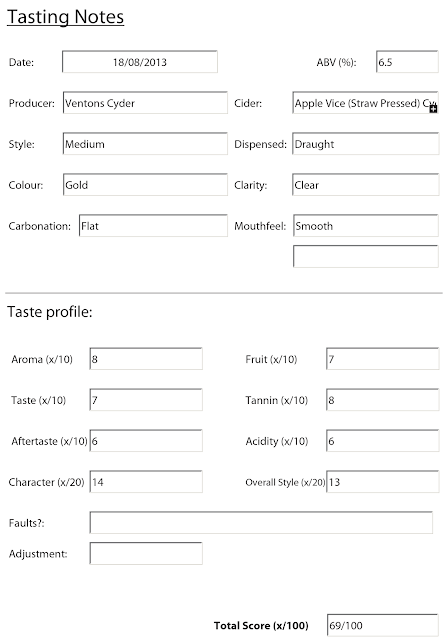