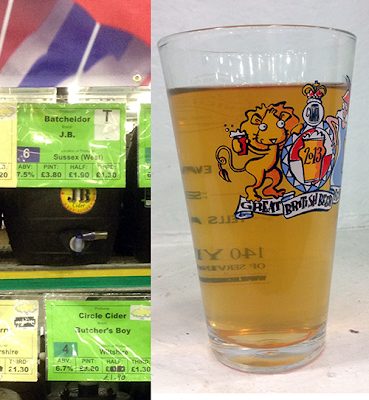 I ought to start this next review with a slight apology to Hancock's. The sweetening gripe really did kind of take over that review - although I assure them I had given their cider all my attention when I tried it!

Now, yet another new producer to add to the list. Batcheldors is a producer hailing from West Sussex... and there are a fair few from Sussex this year (including a few bar volunteers). However, it is good to see this county represented as often they are just known for 'Merrydown' (although that isn't made in Sussex any more).

As has been so eloquently pointed out in other places by those who seem to have a ready made negative opinion on everything cider or perry related, the festival this year did not have a UK-wide representation. The cider and perry mainly came from the south and Wales - although Cambridgeshire, Oxfordshire, Denbighshire and Bedfordshire are not exactly 'cider country'. However, I stand by what I have already said - the quality of cider this year is exemplary of the quality of cider available in the UK.

I seem to recall (well, not really - I looked at my own notes from the 2012 GBBF) that there was far greater representation from across the UK last year. Unfortunately, the quality of the cider was not always up to much and there was even one review that I would not publish (and I guess with peace in mind I had better not say where that producer was from!). So, I can say that I have seen representation across the UK at GBBF... and this year it was the quality that stood out for me - despite the representation not being so great.

My conclusion to this is two-fold. Don't knock a thing until you have tried it and good cider is good cider no matter where it comes from! CAMRA have a lot to sort out in order to be effective for cider and perry. I know that (see previous posts). However, I guess some people feel that everything has to conform to their own narrow minded set of ideals eh!

Sorry about that - back to the review. This cider looks quite golden for an eastern cider - it will be interesting to find out why. I am sure that there are cider apple varieties available in Sussex... let's face it, even if there aren't there are no rules to say that your fruit can only come from your locality (and I am resisting the temptation to make a sarcastic comment about narrow minded ideals).  The smell is good - full bodied with a touch of acid up the nose.

To taste, this cider has a mature, mild acid going on and (guess what) I am finding some tannin too! It has a wonderfully fruity taste which is lightened by the mild dessert apple acid that underlays the main flavour. The tannin is very soft and a touch drying - and for once I am glad to say that this is in fact a dry cider!

The only thing that makes me stop a little is a low level sourness somewhere off the acid. This can only come from a certain few varieties. On this occasion it is very low and doesn't detract from the flavour and the overall experience.

As an afternote - working my way through this cider, the sourness does develop a little more (perhaps building up in my mouth). The acid is overcoming the body of the cider too a little and, if I were a betting man, I would say that it feels the dessert/cooker varieties are 70/30 over the cider varieties. However, from Sussex - with it's tradition of light, sharp ciders - it is really very good.

See. It doesn't matter that this cider isn't from Yorkshire or Manchester - does it!

A score of 71/100 sees another bronze apple being doled out. Nicely done:-) 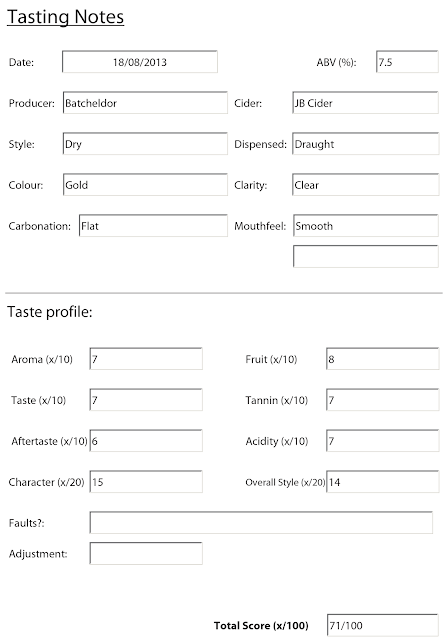