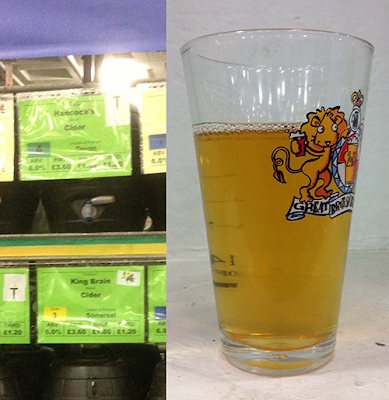 OK. This next cider is from another producer I haven't come across before. Hancocks Cider is another Devon producer (I do seem to be drawn to these this year). They have producing cider at their mill for over 50 years - so they should know what they are doing eh!

CAMRA have marked this cider up as being tannic. A proper Devon cider then:-) It is golden and pretty clear - very nice looking in fact. It smells good too. I think the CAMRA buyer has excelled this year! Fruity, full bodied and - well, nice.

Yaaagh. Too sweet! Far too sweet! I know it is meant to be a medium but there is no way this is that dry even!

Right, I have been patient through these reviews so far in the hope that I am wrong, but I have to say one thing about a number of the cider at this festival.

Cider makers: Over sweetening your ciders is NOT the way to attract more drinkers to your cider or make them more 'accessible'. It was a real shame to see that whilst there were no '7' (Very Dry) ciders there were 3 or 4 '1' (Very Sweets) including a Tutts Clump and XX. Where did the idea that over sweetening is a good thing come from. I can tell you straight; it isn't a good thing in any sense!

What 'new' or 'mainstream' cider drinkers who wanted 'light' and 'unchallenging' ciders went to the Westons bar... in fact I overheard one lady say to her partner "I like cider" and having walked past the real cider bar without so much of a glance head straight for Westons because that is what she equated with cider.

Not much you can do about that I am afraid... the world is full of sheep and many cider makers appreciate that they aren't going to attract those who get sucked in by marketing budgets and 'brand' appeal...

However. The words to note are 'light' and 'unchallenging'. Oversweetening doesn't make your cider any lighter or less challenging. Damn sight more challenging to me and others who want to appreciate the intensity of real cider. Sucralose is not the golden bullet to increasing cider sales. Good cider,reputation and thinking about your cider flavour are the key... and that doesn'tt come in a packet which can then simply be chucked into your products.

OK. I had to say all that. It was interesting to see how many people felt that the cider was 'too sweet' and I do think it is high time the industry pulled back from it. Even those behind the bar admitted that they were disappointed and they assured me that they hadn't ordered than many sweet ciders... so this one is really at the producers door I am afraid

Why am I bringing this up? Well, there are people who point at real cider and declare it 'scrumpy' and nasty - these people think that mass market ciders were the saving of British cider and that craft/real cider will always be just the extreme end. They point to quality (off flavours, badly kept cider and ascetic tones) and over sweetening (i.e. we don't know what we are doing)... I disagree with this - it is an excuse (often by the mass produced cider makers) for doing what they do. It is lazy. But as ever has some basis in truth.

Back to this cider - there is a lot of bittersweet fruit in here and the tannin should be great... but it is drowned out by the sweetening - its almost as if its overlaid the tannin with sugariness. I am getting some good fruit in the mouth, with a touch of acid too. However, whilst this should develop into a complex taste with an aftertaste it just ends in a sickly sweetness.

In conclusion I would like to try a dry version of this. 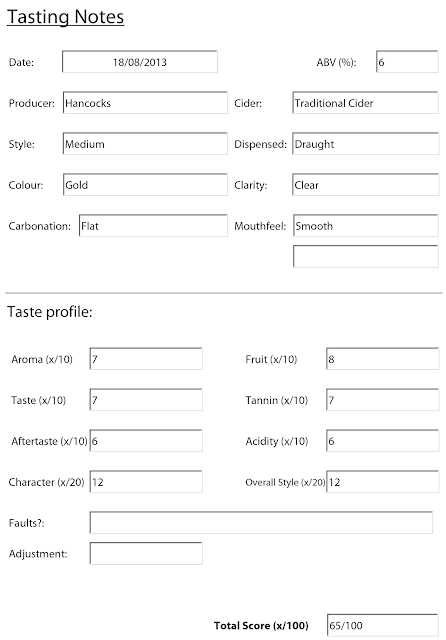