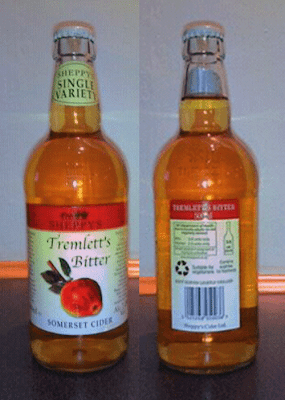 Aha. I have hunting this cider for a little while now. In my head, the Tremletts cider must be one of the most hardcore and off the wall of ciders; the polar opposite of a Bramley cider! Well, that is perhaps over stating it. A bramley cider would win in the hardcore ciders front as being nigh on undrinkable if found in full juice fashion (though I am happy to be proven wrong:-) I remember trying a Tom Putt cider at the Great British Beer Festival that was hellishly sharp... Bramley must be that times two. So you can get the idea how fascinated by a Tremletts cider I am:-)

Sheppy's describe this cider as having a 'high tannin content' - yeah, I'd say! I use Tremletts Bitter with great respect and to add some tannin to early dessert fruits (the Tremlett is an early bearer so balances out these thin desert apples really well). They do go on to say that this is the mark of quality... I do disagree slightly, tannin + character = quality. Just tannin and no character wouldn't make a vintage cider. Finally, Sheppy's say this cider is rich in flavour. Again, I am pretty sure it must be - as I have said, Tremletts is like a condiment (not my term, but one that is very appropriate!)

Its an inviting drink, although you can smell its west country heritage a mile off. It is rather nice though (if you have the patience to wait for the bubbles to subside a little - it is quite lively).

As for the taste, well, you know, I am getting a Tremletts taste in it which I am surprised to say is not bad at all! Having eaten one or two of these (taken a bite out of them I ought to say) there is a familiarity in this cider. Wow. Not bad at all. I have to say though that I do think it has to have been toned down a bit... well, quite a lot. That said, its a very good job it is.

The tannin really owns this cider, and there is little room for acidity (although there is a hint of it, which is a little hard to explain!). Even in the aftertaste, its tannin, tannin and more tannin. However, there is a distinct character to it which is pleasant to say the least.

Would I drink this again? Yes, most definitely. Will I be making a Tremletts cider next year to test against it... he he he... probably:-)

A score of 87 gives it a very surprising silver apple from me... still not convinced about single varieties though! 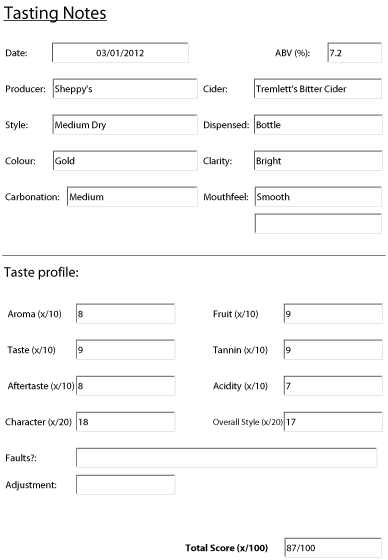