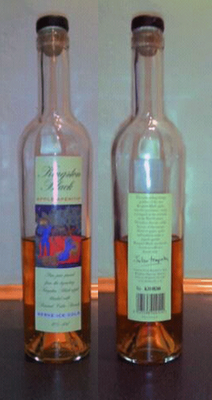 Burrow Hill are not exactly your run of the mill cider producer. Visit a number of producers and you will find many make cider (duh, yeah, so!!) but along Burrow Hill is an experience in itself. Whereas others offer a wide variety of ciders, and at some you can even try your hand at blending, Burrow Hill produce a seemingly huge and varied range of stuff from the humble apple.

A good Waitrose will sell either the Somerset Pomona (already reviewed) or this one, the Kingston Black Aperitif. These cider based drinks are both crafted and not exactly cider (again... doh!) If you are hunting around for Burrow Hill you will also come across their alias - The Somerset Distillary, or Somerset Cider Brandy... again, available in larger Waitrose stores, this is the English answer to Calvados.

In an effort to sound reasonably up with things, its worth mentioning that Burrow Hill recently won PGI status for their Cider Brandy. However, this is more for the technicalities of European weird regulations which failed to include the term 'Cider Brandy' as a legal thing... In any case, it has to be hats off to Julian Temperley for two very good reasons: 1. that he pursued this and got the regulations sorted out and 2. that he bothered to do it at all - after all, West Country cider makers have a bit of a reputation for simply sticking their fingers up at rules and carrying on!

Now, to this drink. I must confess to have trying it several times before... if I cannot get hold of the Pomona then this is always next on the list. I didn't so much discover it as was persuaded by Mr Temperley to buy a bottle when I bought some of his Kingston Black Bottle Fermented Cider (not yet reviewed for Cider Pages!). Call it salesmanship or whatever, it offsets the dryness of the Bottle Conditioned Cider so well that I don't mind the tenner or so I paid for the bottle.

So, its a nice addition to cider, but how does it stack up on its own?

Well, this is a blend of Kingston Black juice and Cider Brandy and you get all of that just from the smell once its poured. Clearly its a shot glass drink as its 18% (it is an aperitif innit!). And sipping away at it, all the promise in the smell is there in the mouth. It is quite sweet and syrupy, but the distinct flavour of Kingston Black comes through in spades. This lasts through to the aftertaste, where the brandy warms the back of the throat.

There isn't a stack of tannin in this - it could be that its competing with so much else that is going on. However, there is little acid effect as it really is very sweet. You can taste it in the profile of the Kingston Black juice though, so it must be there.

I take my hat off (well, I would if I had one) to Julian and his team. Not only do they make cracking cider, but they have stretched the boundaries of apple produce in the UK drinks industry to match or even surpass that of the French.

88/100 and a very safe silver apple for Burrow Hill 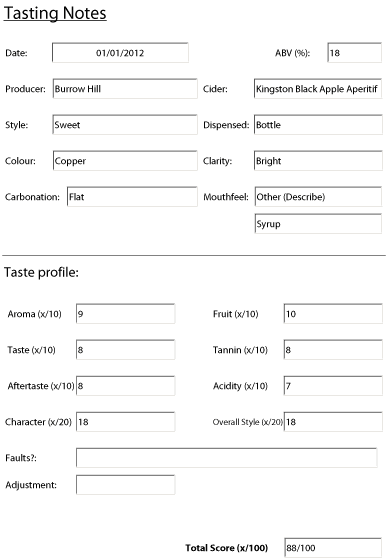