As I may have mentioned for the last Tutts Clump, I procured two ciders on my recent trip to Berkshire. The first is already done and, hoping to save the best till last, I now come to the dry (yes, a dry cider!! I do like dry ciders) special reserve. I have a hope that it is also a pretty much flat cider too.

I have done a little homework on Tutts Clump since the last review. It appears that this is a rapidly growing company who mainly sell their cider around the South. It also seems that he produced a cider to celebrate the Royal wedding earlier this year. Well, I guess someone had to:-) Seriously, I had a Royal wedding tea cup when I was a kid and Charles and Diana got married, and I guess this is a more mature kind of keepsake... Mind you, after all this time I can still see the tea cup when I visit the parents now and again. I am not sure that a Royal wedding cider will keep quite as well!!

Anyway, getting back to the point. This is a 6% full juice cider. Again, its made from desert and cooking apples, so it should be nice and light with a good sharpness to it. I note that it has also got a few crab apples in it too - if you can't get cider apples (or don't want them) then crabs can add a bit of tannin to a blend.

As expected, flat. I do think that it attempted a bubble or two but that may have been my eyes playing tricks on me. Its also a yellow colour and hazy - like its sweetened cousin. Very much an eastern style of cider and does not appear to have been filtered at all - the sediment at the bottom of the bottle confirms this. Lovely!

This tastes like a nicely matured eastern cider - think Aspalls with the fizz removed and a similar bite. I can't taste any tannins at all, so the crabs must have got lost in the blend. This is a shame, as crabs are a little bit like tomato ketchup for ciders without cider apples in. You don't want too much ketchup or it will drown out other flavours. OK, not a great analogy, but roughly true.

There is a lemony smell to the this too - albeit with a background of sulphites. A nice summery smell, which is often accompanied by a bit of a yeasty smell (although not in this cider). It does taste a little thin though. I am sure that its just the way it is - at 6% its not been cut by much if at all. Its also a tiny by acetic - although again, it could just be how it is. My suspicion is that its from the type of culinary apples in the blend - Bramley, for instance, is nothing but acid... no real quality taste behind it (try eating one!).


This is a raw cider - no sweetness to cover any of the acid, although its not unruly or unpleasant at all. However, as much as I like this cider I do think its a bit of an acquired taste and that people who are only used to mainstream brands may find it a bit 'out there. Still, aren't going to please everyone eh!

Looking at my scoresheet - which I always write up as I drink, this cider scored 68/100. Okay, so its not an apple; I think its because the sweetness in the 'Farmhouse' cider masks some of the acid that is so bear in this one. However, its only my opinion. 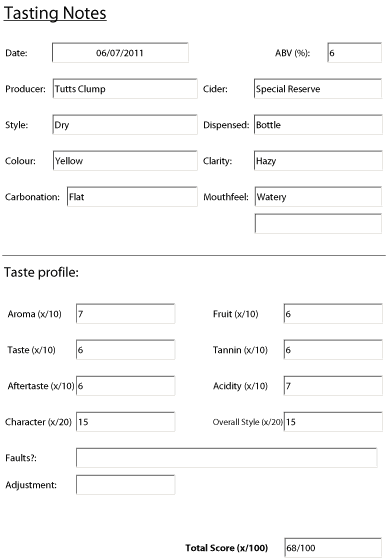