And now on to the last of the French cidres that I bought home with me a few months ago. Have I saved the best till last??? In all honesty, I am not sure - I was lucky enough to try some really nice cidre from Normandy. However, lets have a try on this one to see how Bretagne compares.

Looking at my CAMRA 'Cide' book, it says that cidre from Brittany is possibly dryer than its Norman counterparts, although the climate is slightly hotter too - so should I expect a dry, strong cidre?? Yum!. Finding it in a Supermarche in Normandy is not exactly visiting the farm though... ah, so what.

Well, opening the bottle gives the usual 'pop' expected from a cider made in the typically French style - whether it be Bouche or Champenoise its all fizzy (but you would expect that to be naturally so). However, this one had a big, big fizz... and I had chilled it first (well, it has been hot here recently!!)

What about the taste. Well, it would seem I both got what I paid for and also what I deserved in trying to stretch my taste buds as far as Brittany without actually doing the mileage. Let me take that back a step. I feel that this cidre tastes a little too played with. Its Okay, don't get me wrong (the properly engineering gloop that you can get in France is definitely poor) but its just, well, tame and odd. Whenever I slate something, I always try to back it up with 'its only my opinion'... and that is true of this.

So, starting from the beginning. There is very little aroma to it - lots of bubbles, but little aroma. And then the taste is like apples that I would never put into a cider; red delicious sprang to mind immediately. Definitely something ubiquitously red or green with a crunch, and not that interesting.

There is some acid in here, and its a lot less tannic than other French cidre. But its not thin... nor is it syruppy. Its just okay.

Like the aroma, the aftertaste is notable by its (mostly) absence. The sweetness lingers though (and whoever said that Brittany cidre is drier than Normandy is so far wrong).

And that is pretty much all I have to say about it. If you are stood in France in the same supermarche I was in (and I forget where exactly - maybe Neufchatel en Bray) then as long as its relatively cheap give it a shot. If its expensive then move on to the Deli down the road - they will have a better choice:-) 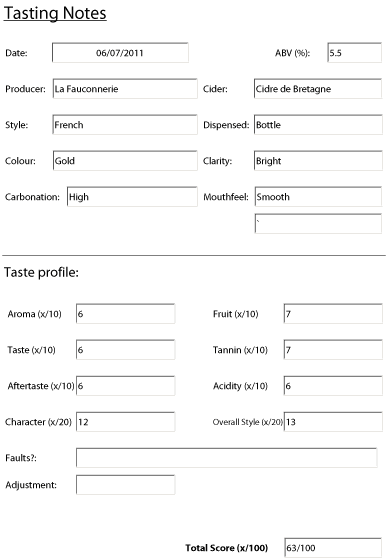