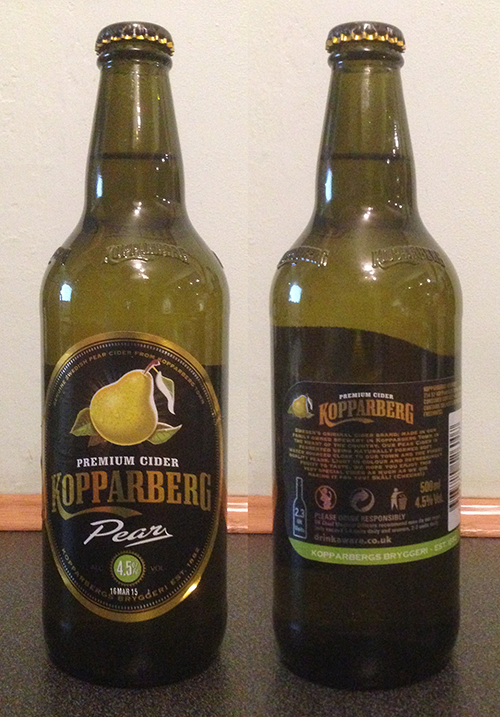 After the last review, I am sat here hoping that this pear cider has little in common with its alcohol free cousin. Or that there is an emergency down t' pit that requires me to leave the house immediately... or perhaps a product recall effective right away. OK, rationalising things I should just get on with this.

The bottles are identical to look at (OK, the words alcohol free are not on this bottle - it is 4.5%. I must say up front that, if it does turn out like the other one it is going down the sink... and I will have found a drink to use as an example of alcocider - which I shall use to compare with the real thing as often as I dare.

Having done the label to death on the last review, I am stuck for something interesting to say about Koppaberg. OK, they are made in Sweden - which must have a very different tradition of making cider than we do in the UK. This strikes me as curious - since HMRC only govern the ingredients of a drink they have no real control over what can be called cider as long as the ingredients are there. And their list of ingredients is both far too long and far too subjective to be of much use. No wonder so many faux ciders can call themselves such. Sadly, also HMRC have very little jurisdiction over what calls itself cider at all - that is for Trading Standards. So there is quite a lot of disjointed thinking going on. I say that in support of my suggestion that the industry ought to police itself more - here is the link in case you missed it.

Koppaberg are a Swedish brewing company based in... Koppaberg - a town in which Wikipedia says there is an older population. It started making apple and pear drinks in 2003. The law that governs cider in Sweden allows anything with over 15% juice content to call itself cider... which I think probably explains a lot - 15% is an insanely low amount of juice to be putting into a cider!

OK. I have put it off for long enough. This drink pours out as ghostly as its non alcoholic partner - a slight tint of greenish yellow (makes it sound lovely, doesn't it?!) There is a much stronger smell in this drink though - again it is pear drops but I am also getting an unnatural sweetness to it. Please God, no!

Now, to taste I have to admit that this has more body than the alcohol free version. This mainly comes from a syruppy body - in no way is there any acidity or tannin to be found. Once again, it is sweet and sickly. Once again... (to me personally) it is, quite honestly, bloody horrible.

A potentially terrible question has occurred to me: is there any difference between this pear cider and the apple version... or do they all taste the same. Fortunately, probably for Koppaberg as much as me, I am not intending to find out. Not that they would really care what an English blogger has to say. But then, is this really a pear cider? It has very little in common with anything that you could say was pear cider (no, I am not going to even mention perry... it is nowhere on any scale of being remotely similar to perry). Surely, pear cider/perry should have some semblance or relation to alcoholic pear beverage in some way?

This scores 26/100 and probably only gets the extra point because it has alcohol in it.

As a footnote, I ought to point out that this drink IS an absolute masterclass in alcopops being dressed up as cider. If anyone need this demonstrated then simply try it. I don't think I need prove my case any more than that. People of the NACM - if you are listening - please, lets have something to differentiate... I mean, have you tasted this? 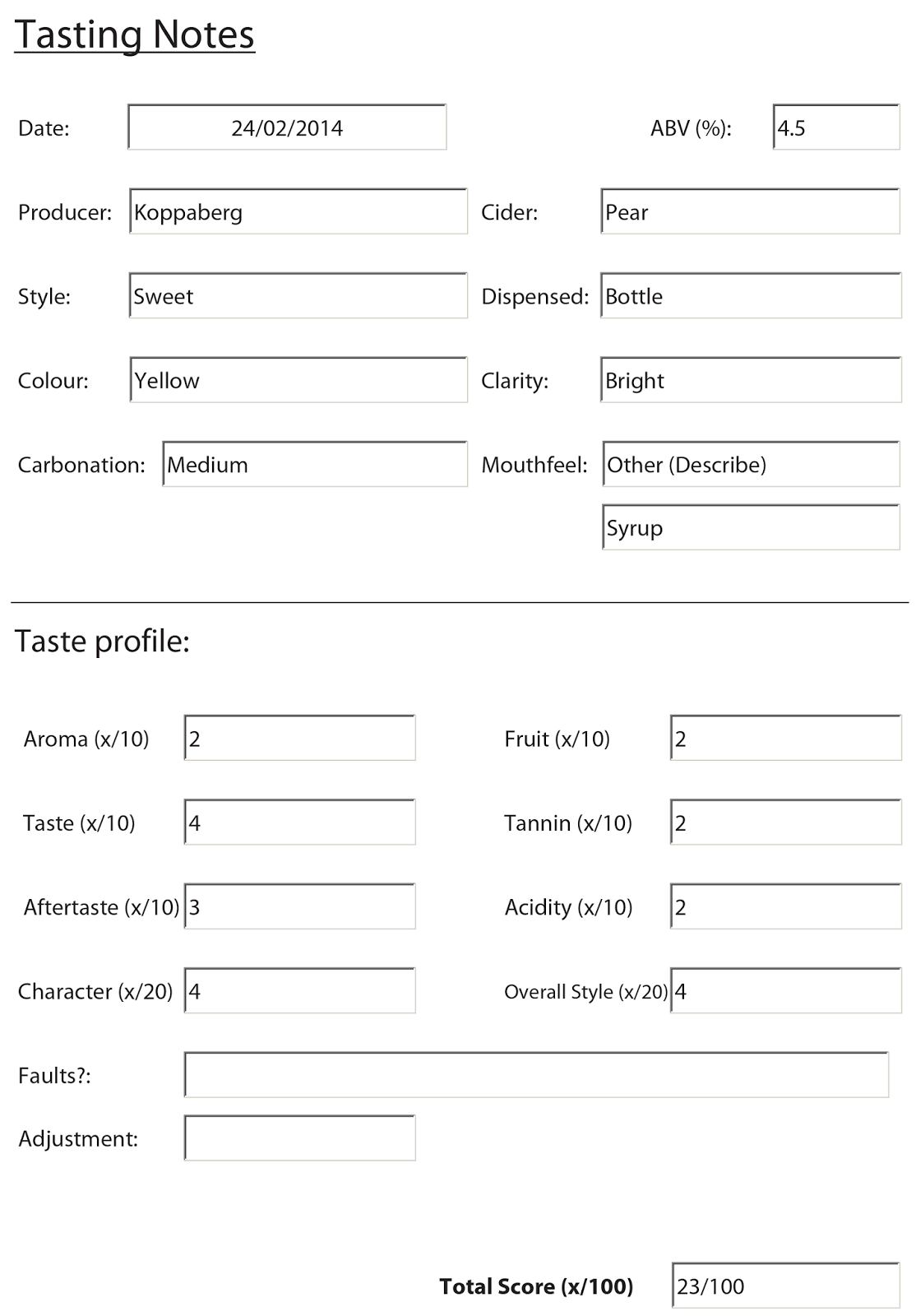