NOTE - If you haven't already, please do take the time to respond to the question at the top left of this blog. It is very much of interest and I promise to publish (and try to use) the results!

I have spent some time reflecting on my attitudes towards cider and perry of late. Whether it is through Weston's dishing out Christmas pressies to MP's to remind them to leave cider tax alone, or SIBA falsly persuading beer drinkers that cider tax is too cheap. Whether it is those banging on about high juice vs low juice cider (my personal choice of drum to bang), the quality of ciders, adding fruit to ciders and misleading marketing (which I am sad to say is on the increase at the expense of honesty and integrity).

It almost feels that there is a cacophony of issues (isn't there always?). By the way, whilst all this is going on, what CAMRA APPLE are most concerned with is the evil of pasteurisation and 'hot filling' bag in boxes... nice priorities guys! Mind you, with some beery blog feigning shock and horror at the fact that CAMRA support cider and perry at all - and for them to have held some position within local branch level - suggests that CAMRA APPLE have got more work to do  focussing inwards than trying to proclaim what producers should do. 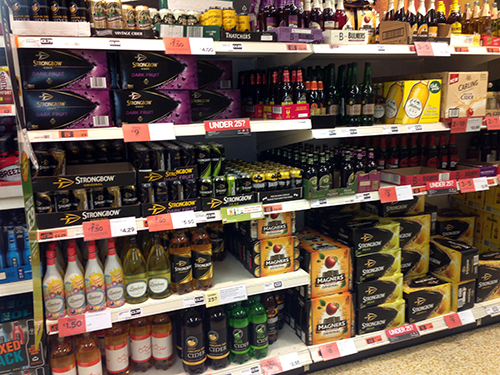 However, most recently, all of this has got me wondering about something that I feel potentially is the biggest danger to cider as a category. I guess it was while reading about the 'Cider Summit' - an event that will probably fuel the Morning Advertiser for a while longer and then disappear into obscurity. However, reading the phrases and language used to describe the category... isn't cider and perry in danger of being classed simply as an alcopop?

Let me explain. Cider is made from apples and perry (or even pear cider) from pears. No so - according to those PR guru's who know the industry better than we know ourselves! Innovation includes strawberries, blackcurrents or even beetroot. How about a cider with a twist of lime? Well, this is low juice cider (often) coupled with something else to make it interesting - or 'unique'. After all, it has to stand out on those supermarket shelves!

Supermarket shelves are a nice analogy to the problem. At my local Sainsbury's (pictured) you have the better ciders at one end, leading through the pear ciders into the fruit ciders. Then there are the ultra low cost ciders and, following, the alcopops. They are grouped together - in a separate aisle even from the beer.

I have heard commentators talk of fruit cider and some low juice ciders as the new hiding place for alcopops. I tend to agree - these things are gimmicks - sweet beverages designed for the young and frowned upon by the establishment; this is borne out by the higher taxation and anti alcohol lobby strategies that led to alcopops being without a home in the first place.

At the same time, you have bar managers at CAMRA festivals fighting to stock fruit ciders. The excuse I have heard before is that "these are good introductions to cider". No, I disagree.

And they are not the way forward for the cider 'category' either.

Aren't all these fruit and alcopop ciders just going to drag down high quality, decent cider with them?

What? I hear a few CAMRA people in Kent screaming something about fruit cider being traditional?! I have looked in to this (alongside other people) and the only traditional/historical use for fruits in cider is to cover faults and poor cider. Sorry, the only way it can be traditional is by doing some clever soft shoe shuffling.

I recall Hooch of old - sweet, lemony and fizzy with bright appealing labels. 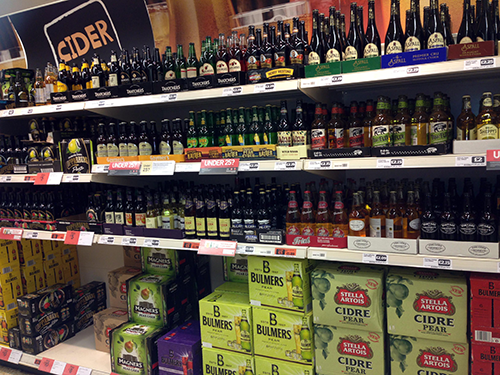 Don't get me wrong. if there were a hint of those in authority starting to view cider as merely an alcopop - and to be taxed as such - then I would join in the chorus of producers and drinkers to cry 'get lost'... much as we all did when the Labourists decided to chuck 10% on cider duty. However, isn't this a topic worth discussing and dealing with - much as those who PR feel that they can decide how the cider industry must be 'innovative'. They didn't say a word about the down side of dilution... sorry... innovation (I suspect they didn't even think that there was!)

Okay, apologies if this comes across as negative. As mentioned, this is the silent assassin of the cider industry. When producers pimp themselves out to marketeers to lead the way for them an alarm goes off. Right now, I see quality (let me say that again, QUALITY) as being the most innovative thing that the industry can do for the better of cider/perry right now.

Not being someone that likes to sit and moan without offering a solution, I do see a sliver of light - an opportunity that high juice, quality (that word again) producers of cider and perry can take... though I suspect it involves some girding of loins and action.

Couldn't the craft end of the industry set a marker in the ground? Seek to differentiate itself - even distance itself - from the 'stuff' that excites cider PR people? My thinking is 'yes' it can be done. However, it would not be without a lot of thinking, planning and agreement. You see the low juice end of the industry, over the last 40 years or more, have entwined 'cider' and 'perry'. From orchards, to bottle manufacturing to campaigning - the big industry players have all the contracts, deals etc. It is more than a tiny bit true that many of the higher end producers hang on to the coat tails and get 'told' from on high when things change.

This is not all bad, but isn't it about time that cider and perry drinkers had some way of distinguishing the two? Sure, those who want to make the effort to seek high end cider. Also: yes, the 'Magners' advertising effect has been good for the industry in general (though perhaps it is often overstated). But - is that a reason to simply all ride together down the slippery slope?

I don't have all the answers, but I do have an idea... what about some kind of distinguishing or protected status for high juice cider? There are mechanisms available under the EU... the French use them - as do the Spanish and Austrians. The Welsh are seeking to use them too. It would possibly need to involve CAMRA as much as NACM etc. And it could be something that larger producers could opt to join in with. Often these things just watch out for ingredients and practices - but quality must also be built in; If only producers could agree on the terms and CAMRA could agree with the producers!

So. What do you think? Is the cider industry heading for a crunch at the hands of its new alcopop friends? Is it time for the high juice section of the industry to put a stake in the ground? And that, my friends, is why I am trying to take a poll...