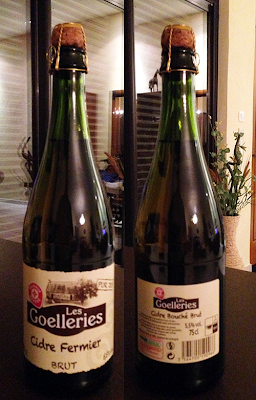 I guess of the two cidre from this producer I have been looking forward to this one more. It doesn’t bear the PGI, but it does say ‘pur jus’ on the label – so I am hoping for a good rich flavour. Being a farmhouse cider, it should bear the character of the producer too… in all quite a good example (although, having bought the bottle from E Leclerc in Gaillac (not exactly cidre country) I won’t hold my hopes up too far.

There is not a whole lot of small to this cider – sure it is clean (what I am getting) but there is not much apple going on in my nose.

Once again, this cidre tastes quite clean and soul-less. There is very little tannin and the acid is quite washed out again. It’s a shame – French cidre clearly doesn’t bear dilution as much as certain UK ciders. The aftertaste is also quite short and fairly dull.

There isn’t much more to say about this drink. I find it odd that out of two ciders, made by the same producers, one is really quite good and the other is not good at all. My only advice is to try stuff and find the good ones for yourself. Getting hold of cidre outside of the traditional cider making areas of France is certainly hit and miss.

I do find it curious that, although this suggests it is 'pur jus' it doesn't bear the PGI certificate like its sister cidre. Recalling the PGI rules, anything labelled pur jus was not allowed any dilution - so the only logical conclusion would be that this cidre is diluted and therefore not allowed to bear the PGI. After all, why would a producer have a PGI for one product? Why not have it for all products... unless they are disqualified for some reason.

Also, to give this review a little context, think small gite in the south of France, 10.30pm and 31 degrees inside. Also think of dangling legs in a pool  - so its not as though I was writing this in a bad mood - and it is not as if this cidre would put me in a bad mood either!! 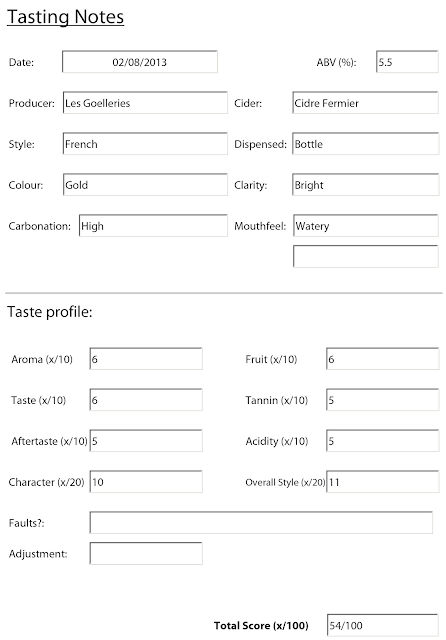