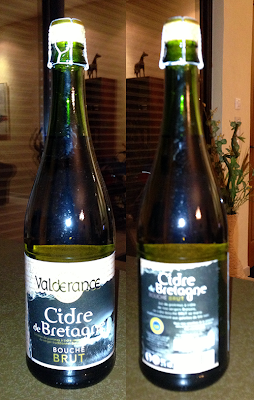 Apologies that I have so far failed to get in any unique or special cidre from France yet this year. To be honest, it is going to be fairly unlikely unless I can pick something up from northern France on the journey home. However, this isn’t a review blog only for those places where special cider is found!

This cidre, made in the ‘bouche’ style is actually made by Les Celliers Associes, a cidre cooperative found in Brittany. In operation since 1953, this cooperative is formed of some 300 growers and uses some 10 to 15 thousand tons of apples... so quite big then!! This bottle has the PGI stamp on it too. I happen to know a little about PGI, so can go away and check the ‘Cidre de Bretagne’ PGI to find out to what standard it has been produced.

The PGI for Breton cider is interesting - if a little open (a bit like the three counties PGI to be honest). Dilution can occur (although it requires the water be added to the pomace 'to extract extra sugar'). Up to 40% of the content of the cider may be concentrate, although if a cider is labelled as 'pur jus' with the PGI, it has to be just that - no water allowed. Filtering and sweetening are allowed. It doesn't give any total juice content requirement though; and often these things are about what isn't said as opposed to what is - you only have to look beyond your nose in the cider industry to realise that this is exactly how the larger companies have exploited lower juice content.

And so, I am sat here, at 8pm in a temperature of 30 degrees ‘C’. The sunburn is calming down a little and I am ready for this cidre. The bottle comes straight out of the fridge (in these temeperatures it is the only way to drink it!) It is presented in the standard French format (gold/sparkling/bright) and pours out with a flourish. There is some tannin to the smell which is lovely and this is backed up by a sweet fruity smell that just leaps out of the bubbles at you.

There is quite a long and complex taste to this cidre. It is more cidery than the other cidre recently. The tannin is very soft and doesn’t win against the acid and sweetness. There is a long aftertaste which is simply more fruit – I am not sure what apples are typical of Brittany but they deliver a low, soft tannin that provides character and a touch of body, whilst the acid is much more pronounced (yet not sour at all).

This is a surprisingly good cidre found in a national supermarket. A good example of the style! 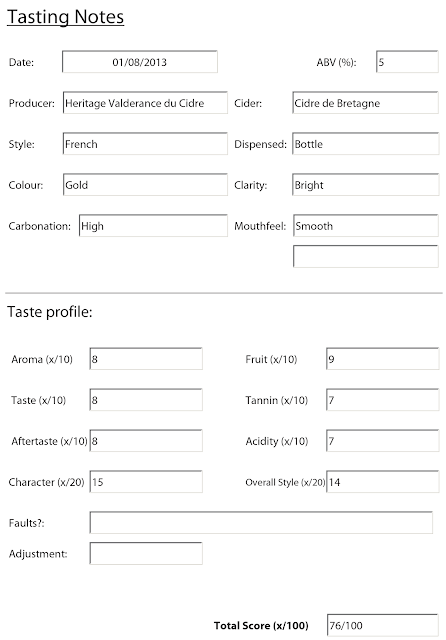