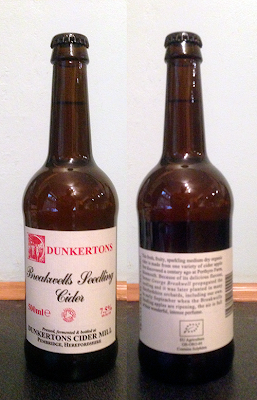 Having now got the Great British Beer Festival and my trip to France out of the way... lots of lovely cider (or cidre, depending on your perspective). Anyway, taking a glance at my cider shelf, I can see that it has grown somewhat (and a bit dusty too). I am constantly amazed at how much cider is around these days (although perhaps the quality/standards of some of the cider needs a post in its own right!)

Heading for the one that has been shouting 'drink me' the loudest, I opened a bottle of Dunkerton's odd single variety ciders. Breakwell Seedling is an apple that comes from Monmouth (I know that 'cos it's on the bottle'. Digging a little deeper, it appears that the variety was propagated by a guy called (guess what) Breakwell, in Monmouthshire. It is a bittersharp variety - so there should be some aid going on. Something that would be interesting to those who think about such things is that it is an early variety. This is significant - most earlies tend towards poor storage/bletting - which means that it needs processing fairly quickly. The other thing that I would say is that most early varieties are pretty thin... especially when compared to later varieties.

So, having done that research I am not sure what to expect of it now. Surely Dunkerton's wouldn't release a cider that was below par...

It has a moderate sparkle and is fairly light golden in colour. However, the smell is actually rather rich - fruit and a bit of farmyard going on. It settles down well and I am ready to go.

The taste istelf is fairly fruity. Not huge on tannin and more sweet than I would expect from a medium dry (though not badly done by any means). It does have a pretty fruity flavour which dominates both acid and tannin. The acid is light and kind of sits in the background a touch too far for me.

The aftertaste is quite sweet still and moderate in length. At the end it is a little drying... the tannin must sneak up a little.

Overall, this is a really good, drinkable but not hugely challenging cider. I like it. No, I am not mellowing to SV ciders... just to good ones. As with all ciders, if all producers could make cider as well as Dunkerton's then the industry would be in safe hands!

A silver apple for this cider - perhaps the scoring is a little high, but I will stand by it. 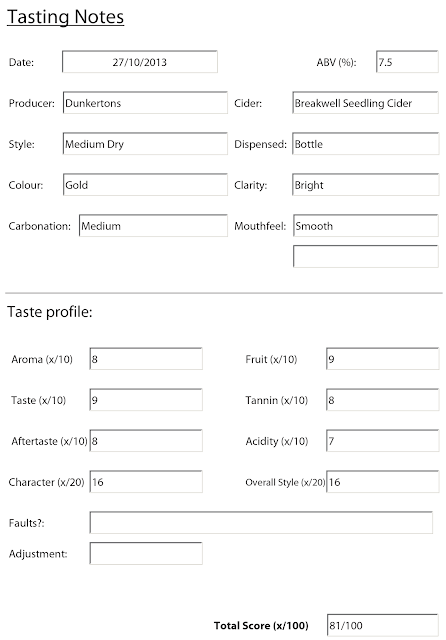