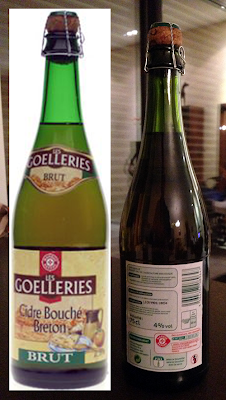 Well, words fail me! For the first time I have failed to have a photograph to put at the top of this review. In actual fact I did have a photograph but managed to delete the frot image (probably the more important one) without downloading it. Oh well... I have pinched one from the website for the supermarket where I bought it - E Leclerg. Hope you don't mind!

Another evening by the barbeque in the south of France and another cidre to try out whilst I am relaxing. I have two cidres from Les Goelleries and this one happened to be in the fridge at the right time. To be fair, writing a few reviews down is a small nugget from home that I have quite enjoyed over the last week or so. I am not exactly the sort of person who can just laze around with nothing to do and the rest of the family haven't felt like exploring too much. So the reviews (I have only really done one a day) have been 20-30 minutes of 'me' time - though the family have sampled and offered opinions:-)

Once again, this cidre bears the PGI – so I can be fairly sure that it is pretty well traditionally made - even if you could in reality drive a coach and horses through the PGI (within reason).

As a Brut it is around the 5% mark and, as expected it is the usual golden colour with a moderate to high sparkle. I am getting the rich fruity smell this cider – it does smell a little sweet and I am sure it is a bit light and sharp too.

To taste it is really quite nice. A sharpness compliments the juice and, as with other Breton cidre the tannins are soft and understated.  It has a juicy body to it that lasts well into the aftertaste – although the aftertaste itself is not that long.

Working my way through the bottle, I have to say that there is nothing to say that is either exceptional or poor about this cider. It is a typical Breton cidre with all the elements that make it good but not outstanding. I suppose it is rather gassy, but perhaps that is just trying to find something to say.

I do like this – and I think it deserves an apple (I say that without knowing the score yet). Not a great apple, but it is very competent and good that it is available freely.

The score is 73/100, so a bronze apple for Les Goelliers - deserved and one to find (if you cannot find anything direct from a producer!) 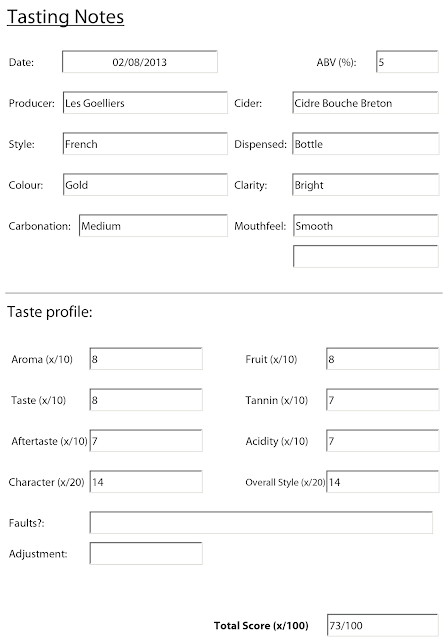