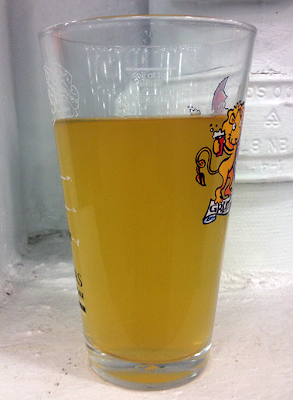 Sorry all - the final GBBF review had to wait until I could recharge my tablet (which had the notes on it!!!). And as I had lost the charger things have had to get a little out of order. So, finally, here is the last review for GBBF!!

I wanted to finish with a floury, so the last choice for me was some Chants Badger Spit... no, isn't it Singing Cider... no - is it Naishs... no wait. Oh, I give up!

Apologies, I found that quite funny. A touch of history before I begin with the review. Paul Chant is better known as Frank Naish's right hand man. Not only that, but he has started selling his own cider too. For anyone who doesn't know who Frank Naish is, simply Google him. I couldn't put into a blog post all that he is renowned for: oldest cider maker in the UK, Somerset based and with some great cider producer opinions on stuff and a real heritage to his cider!

The above joke relates to an incident recently of Chants cider being 'rebadged' and sold on. At one point, it was feared that someone else had essentially faked his label onto some other cider. This is quite simply fraud and it isn't the only example of unscrupulous people re-labelling ciders. To be honest, I feel that taking someone elses cider and re-labelling as your own is a poor practice in any case... and yes, it is done.

On with the cider review though. Yes, by this point I was contemplating calling it a day but wanted to get to 15 ciders in all. So I took some time out - I watched CAMRA bods bidding for 'antique' beer mats and such like and the set up of the evenings band. I bought a new t-shirt with a beery/cidery surf wave on it. I had another go at Northamptonshire Skittles and nearly decapitated the poor guy watching over the stand. I wasted some time.

And so, I am handed a glass of golden hazy liquid with a bit of an identity crisis. Advertised as Badger Spit and then as Singing Cider (and add to that some odd brandings by some odd wholesaler). The bottom line is that it smells very nicely west country - deep, rich and tannic.

And the taste is good too, though disappointingly it is far too sweet. OK, its a medium but its at the sweeter end of that too. Working my way under it, there is a good level of tannin and not a lot of acid (there may be some, but its hard to find). Its a shame that it is sweet, I would have liked it much drier than it is. Still, never mind. It does occur to me that perhaps I am not doing this cider justice by it being my last cider of the night... but there had to be a last cider!

The aftertaste is moderate in length and sweet.. quite sweet. I do like this cider, but would not choose the medium version again. However, it was good enough to get a bronze apple with a score of 73/100. 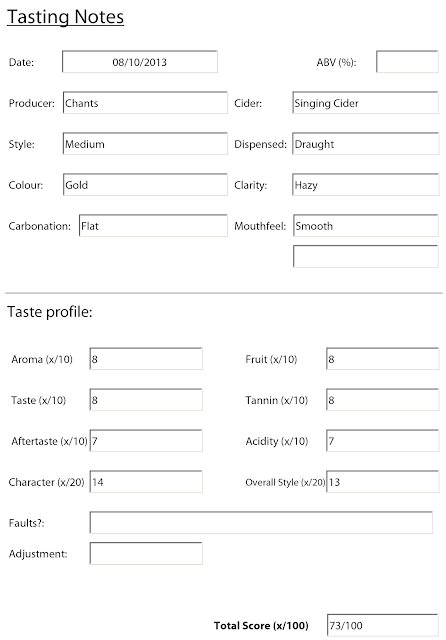