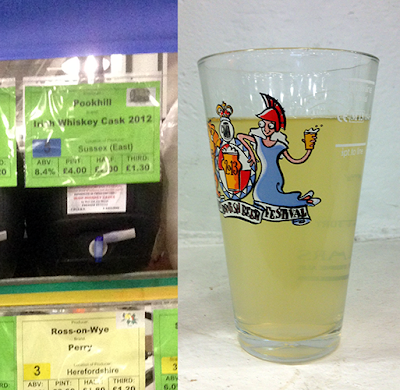 One thing I am really pleased to see this year (or not see, as it turns out) is the removal of the scoring system for cider/perry/ale on the Great British Beer Festival website.I know it was meant as a guide for those attending. I know it was a 'good idea'. Actually, it is a neat idea... except for the fact that you could vote for something as many times as you liked. OK, there was some measure of control - you had to refresh your browser before each vote. However, last year this scoring got to silly proportions (and I know for a fact that those supplying the festival were on there scoring their own time and time again).

So, this year it is gone and replaced with a list - not the most helpful or user friendly of lists, but it is a step in the right direction. Now, for next year, if they could bring back the 'create your own wish list' which I seem to recall from previous years then I will be a happy man.

On with this next review then. Having had a comfort break (too much information yet again) and a delicious plate of sausage and mash (stuff of gods!) I was back again and ready to try something a little different.

The Irish Whiskey Cask name of this cider certainly caught my eye; not least because there is a dwindling number of ciders named as 'spirit cask' out there... the furore that followed the problem with spirits imparting flavour and strength to a cider has meant that many (including one of my very favourite ciders from Ross on Wye) have removed the reference to the cask. Presenting a great or good cider from a spirit cask is also a very tricky business. Not enough and, well, why bother as it is just cider and too much and you ruin it (and risk a visit from HMRC).

Mind you, at 8.4% this cider certainly is all the strength a cider can be!!It is a hazy cider that smells of apple juice (to be honest) and comes across as quite a light eastern style of cider. Mind you, Pookhill is the cider produced at Middle Farm in East Sussex - so I would guess eastern counties is going to be about right!

For anyone who doesn't know, Middle Farm is home of the National Collection of Cider and Perry - a great place to discover lots of ciders (and buy them too). This is one of their own - and to think I had no idea that they made cider as well as sell it!

Back to the smell. If I had to describe it I am smelling elderflower, citrus and dessert fruit - no whiskey at all. This is confirmed by the taste. I cannot detect any whiskey (Irish or otherwise). Moving on from that and judging it as a cider I have to say it is a reasonably sharp eastern cider. Very well done actually. There is something in the background too and after a bit of tasting I work it back to be a nice wood component which must come from the barrels. This is interesting. I have mainly tried wood matured tannic ciders, but it works well (and differently) with more acid fruit too.

So, its a good cider matured in wood. Forget the whiskey it just isnt there (for me). But as an example of this style of cider it is good with a touch of bite and a wooden note behind it. It also has a long aftertaste that works well in the mouth. 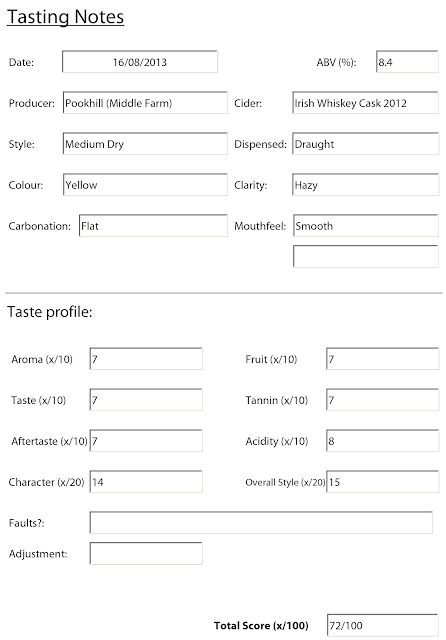