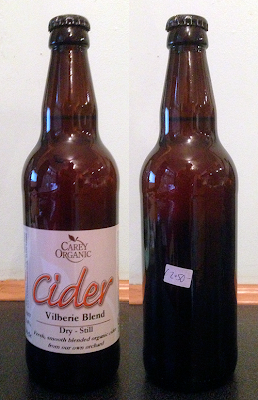 Vilberie. An interesting apple and one worthy of putting onto my Cider101 single varieties. I have come across this variety before now, although never actually used it in anger (though I have heard some good things about it)

As I will have mentioned in the Ty Gwyn review (although failed to include for Cider101), Vilberie is a French cider apple. It was brought to the UK from Brittany in the late 19th century - that time when the UK's appetite for new apple varieties appears to have been at it's zenith. It is a late cropper - which I think must make it quite astringent, although one person who I know to have made a Vilberie cider has commented on the fruitiness of the juice.

Getting on to trying the cider, It pours our deeply golden - very deeply golden - and still. It actually looks as though it means business, even though it is bright and clear. The smell, however, packs fruitiness rather than much tannin... and there is stacks of it. I have to say it smells a little juicy although not in an apply juice kind of way - it's just the fruitiness of the cider. So far it is an interesting cider which almost seems dark and brooding...

To taste, well it lives up to it's fruity smell and what I have heard about the fruitiness of Vilberie juice. It is loaded with pungent apple and hedgerow fruit tastes - and it even has some tannin kick to it as well. The longer I hold it in my mouth the more drying it gets - a real sign of tannin that develops; really good (unless you only like sweet ciders!). There is very little acid to compete against the tannin, so it doesn't need a lot to dry the cider out.

Vilberie has a long aftertaste too which continues as a dry cider but with an almost juicy fruitiness. I don't think this is a balanced cider but, as expected, this is a very interesting one - let's face it, unless a single variety cider has been played with to balance things out they are all going to be somewhat unbalanced in one way or another. It has so much fruit flavour in it that pretty much dominates all the character - but this is not a bad thing (and I suspect would work especially well in a blend). I like it.

A score of 79/100 sees Vilberie with a bronze apple. It is very well presented too! 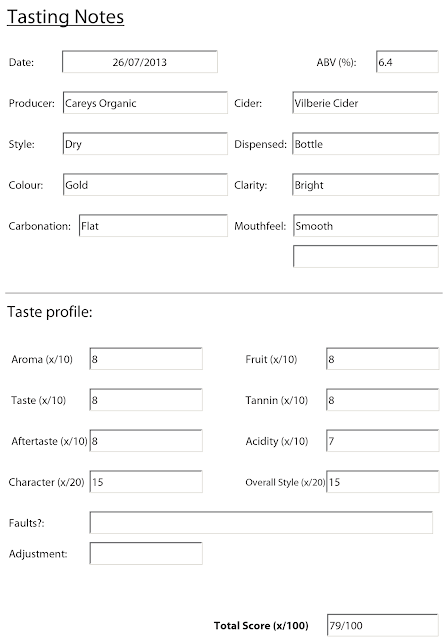