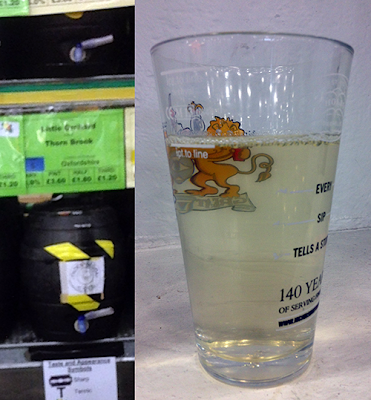 Considering I had spent forever getting to this festival (I left at 0930 and arrived at 1400), hadn't eaten anything since breakfast and needed the toilet... OK, too much information... finding that I was in line to try my third cider before going to the loo and getting something to eat was a little surprising!

This is the wonder of the third pint. After this cider I will have only drunk a pint - OK, averaging between 5 and 8.5% that is still going to be a bit of alcohol... but it is how it should be with ciders. If us Brits can get our heads around the fact that cider is much stronger than beer then this quantity makes a lot of sense. It is kind of half way between a wine glass and beer glass. To be fair, half pints would have been nearly as good but the point is simply this - if I were serving at a festival and people asked for 'pints' I would suggest that they aren't going to get through that many new ciders by doing it that way... not that some people care. Not that some people care (to be honest those most likely to scan the festival guide for the strongest cider).

For some reason best known to CAMRA I actually stood next to someone who made a big deal out of getting a pint of Thatchers Traditional (OK - its the one thing that the organisers let themselves down on). For once I find that I am very happy with the organisation of APPLE, but I do have to ask why they would break their own rules to get Thatchers Traditional onto the list.... I mean, several APPLE committee members were present (and even organised the list!) And then there was the Westons bar which can only have been there because Westons pay a healthy amount into CAMRA coffers... though it is the most obvious cop out and one easily avoided (and, lets face it, neither Westons or Thatchers are really the bad guys are they... or at least they are not the baddest guys!)

This next cider wasn't originally on my list. However, after a little adjustment it became one of the ciders that I wanted to try as it was a drier cider than most (I will get to sweetening... I definitely have something to say about it!!) The Little Orchard Company are based in Oxfordshire and produce cider sourced from both their own orchard as well as from the local area and other orchards. I particularly like that they claim that every apple is inspected. This gives me a real sense of their scale of operation (I would have to say sub 7,000 litres) - I can relate to this... washing small amounts of apples and putting them into the mill lends itself to single apple inspection. I have to say though, get bigger and try to keep up with it all!!! If they are still at the stage of hand picking all their fruit, then I can see even more reason that each and every apple is spotless... though as I have realised it doesn't have to all be like that:-)

On to this cider then. Well, the first thing I would note as it is handed to me is that it isn't cloudy. Also, it is a lot lighter than the others I have had so far. Given that Little Orchard are based in Oxfordshire, I would expect them to have access to both dessert and a bit of cider fruit (although, lets face it, you can get hold of cider fruit by travelling a few miles down the road!!). In all honesty, this cider is keeping it's cards close to it's chest - the smell is almost non existent. I am getting a small amount of fruit though... but nothing that is particularly helpful in letting me know what to expect.

The taste is very light and delicate. It feels quite dry, so at least it has been sweetened sensitively. The main feature of this cider is that there is sharpness to it - although to be honest it isn't a pronounced acid... gently acid is what I would say. This is one of those ciders that needs the carbonation of being bottle conditioned to liven it up a touch. Don't get me wrong, there is nothing wrong with this cider, but I do feel that there is something missing from it.

There is very little or no tannin in here to add body to it, so it comes across as being a touch 'squash' like with fairly low level fruitiness and an acid that makes up the main bulk of the character.

It has a medium to long aftertaste which again is not biting but is quite satisfying.

It may just be me, but I could do with a bit more bite and a bit of a sparkle. It may be that, with the conditions last year, the acids are washed out a bit - so one to try again on a good year... Do try it though - it is a fair example of an eastern style of cider (without sourness or sickening sweetness!) 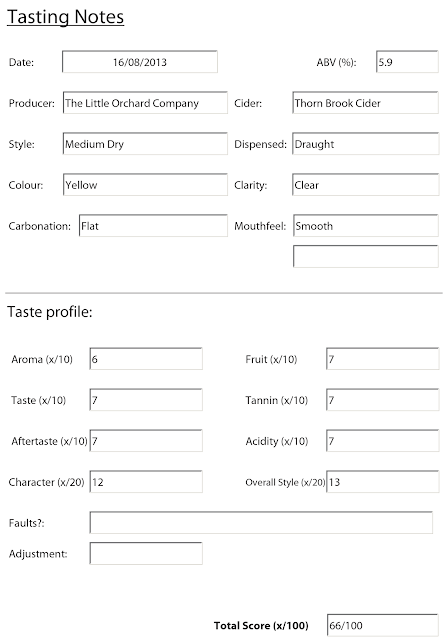