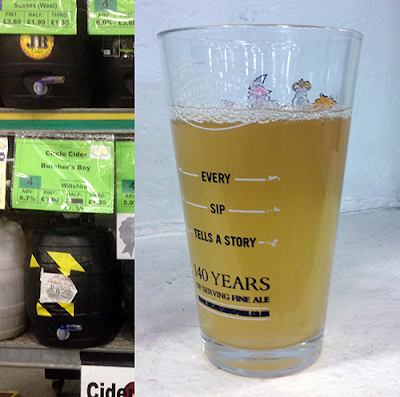 Moving surprisingly quickly on to my second cider of the day at the Great British Beer Festival, I present Circle Ciders 'Butchers Boy' cider.

Circle Cider is a small producer based in Wiltshire. There are a few producers outside of the 'ciderland' usual area's here this year and that is to be celebrated. When I say Wiltshire, what I meant was Swindon... and Swindon is not renowned for it's cider:-) I seem to recall that I once bought a car wing or door from some guy in Swindon off ebay... okay, I don't have much to offer beyond that!! I wish I could tell you the story of 'butcher boy', but I cannot find it (and their site is 'under construction').

One of the saving graces with GBBF is that cider can be sold in 3rds. Sure, you should be able to get cider in 3rd pint at any festival - though I haven't seen it at many! A third of a pint is more than enough cider to do a proper review and yet not too much that the reviews start to fall apart after a couple!

OK, on to this cider then. It is handed to me as a still cider that, whilst golden is a lot lighter than the CJ's. It is still cloudy, which I have a feeling is going to be a recurring theme. The little sticker suggests that this cider is fruity; although sticking it to my nose I don't really get much of a sense of this. It smells good though - cidery and 'normal'. Perhaps the fruit is in the taste then.

I have to say that I am not a medium sweet cider person. However, this was on my list and as a '4' (Medium) it just about stays on there. I do want to get through a few today, so I cannot afford to be too fussy about sweeetening!

There is some really nice acid in this cider, which develops the fruitiness of the drink. I am finding some tannin too... not a whole lot, but it is there. As a plus, the 'medium' is more like medium dry to me - so they have the right attitude towards sweetening. Oversweetening is a crime against cider (and another topic for a cider101 sometime!!)

Working my way through this, I am getting a bit of sourness to the acid... could be Bramley, although there isn't that much of it so I would suggest they have been a little restrained in its use (which is a GOOD thing!) However, this puts the tannin right into the background and I can only say that this cider is much less about the tannin (which appears to be there to provide a little body) and more about the sharp fruitiness.

A moderate to long aftertaste, where the acid and sweetening do become a bit more sickly together. However, don't let this stop you from trying this cider. It is really competent and an interesting drink with some intense flavours and character. 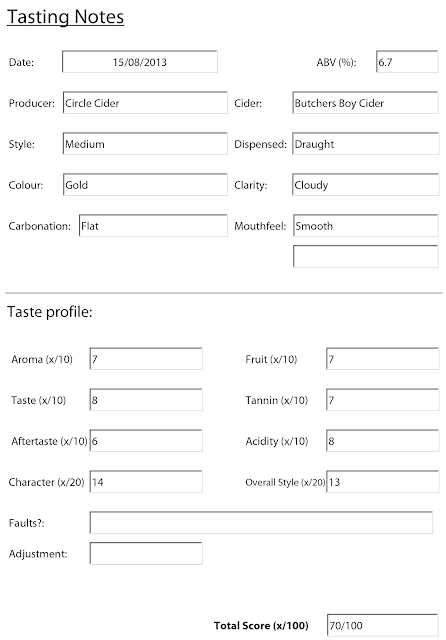