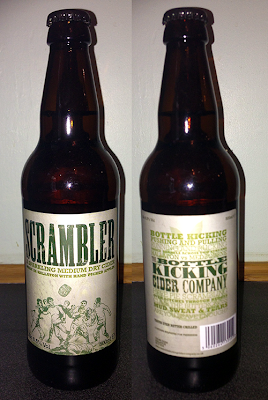 This is a company that I know very little about. Thinking back I have to say I bought this back in June/July from (I think) a Tesco somewhere... so, how does a company 'suddenly' appear in a supermarket without having any other presence? Are they new or am I just not as well informed about the industry as I sometimes would like to believe I am... don't answer that - a reality check is often a good thing for anyone!

It has a very busy label, and one that I am not entirely sure that the Portman Group would appreciate - with lot's of 'hard man' words that seem to associate this cider with exercise and sport (of some kind - has anyone heard of a rugby style game played with cider barrels?) It doesn't really say a whole lot about the company though, so onto the interweb I go to find out more: I have to say their website answers a lot of questions and also reveals that they are not the usual Somerset/Herefordshire producer. That makes me keen to try the cider.

Well, there isn't a sport of barrel rugby - apart from a scramble that happens between two villages in Leicestershire, which is where this company hail from. It says very little about themselves per se (although one of the main links doesn't actually go anywhere) but it does say a fair bit about the cider. I am now expecting it to be full juice albeit mucked around a little - "we take the containers to our bottling partner, where our cider is filtered, naturally sweetened and carbonated to our exacting standards." (taken from their website). Bottle Kicking are by no means unique in using contract bottling - although this process can involve cutting too. However, I can say that the initial process is (at least) a traditional one.

Opening with a fizz (a moderate one) this cider is as described - filtered bright and golden. The smell is a bit faint - though this could well be the result of filtering. However, I am getting a clean fruit smell with apple and hedgerow - blackcurrents and elderberry - in the nose.

The taste is also good and clean. It is all quite mild, although there is a funky acid somewhere in here. It is a bit drying in the mouth - I really like the sensitive sweetening as this comes across on the dry side of medium dry. The acid itself is quite mild, although that is definitely where the odd tones come from... I wonder what varieties are producing that. It does make it an interesting cider though.

It does seem a little watery, but again, it is nothing drastic so no real concerns. The flavour is pronounced and in all I wrote that it had a little bit of a kick to it.

The aftertaste is warming in the throat and long. The drying stops though and I am left with the acid funkiness - which I am not entirely sure about but doesn't taste awful.

In all, I quite like this cider. As described there are a few odd things about it but overall it has character and a bit of charisma too for something that has been filtered and processed. The taste is interesting and at times quite intense (so perhaps not for the person just moving away from Strongbow then!).

With a score of 73/100, Scrambler gets Bottle Kicking a bronze apple. 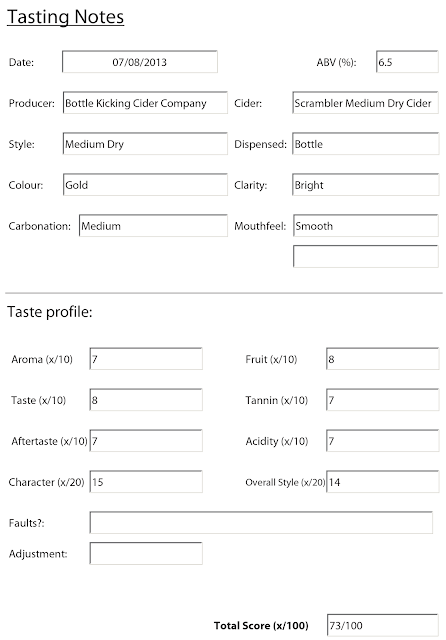