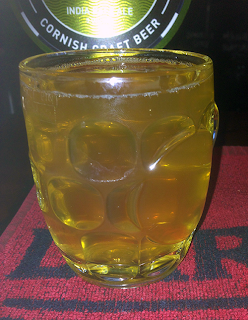 Now for something new. Having been to London far too many times for any country lads liking, I have begun at least to understand a little of the philosophy of cider in London. Real cider is cold. It is often cold and sweet. And normally it is cloudy too. I have to say that my experience so far hasn't yielded the sort of cider that I have experienced in other parts of the country - and I think this may be down to 'what the public wants'.

However, never one to refuse to try something new I headed to a different part of 'town', northwards to the Southampton Arms in Highgate Road. It's a bit of a trek getting there - mind you I opted for the tube and a walk... and it never helps when you leave a tube station and head off in the wrong direction for 5 minutes! Still, my first thought in seeing it was; "It isn't as big as I thought it would be".

I am not one to use the 'quaint' or 'chique'. I am not even sure how to spell chique (and there is a red line under it as I type, so clearly not like that!) What I will say is that it is a cracking pub - old style with chalk signs, large bar and even a guy playing the piano. I think it must be open piano night, as the player changes a couple of times. At the bar, big and old, some other guy is negotiating their way with (I assume) the landlord to give him a 'slot' sometime. There is lots of beer on here too... and it is tempting to buy one of the several summer beers or an IPA - though these are only really second choices for me.

What pulled me here though it the proclaimed choice of ciders (I will write more about that in my next post, else I will run out of things to say!). My first choice was simply called 'Harry's Cider' and it is meant to be dry.

A little bit of research into Harry's Cider and I find that the company is also called Harry's Cider. I guess it must be his/her cider then:-) Well, Harry's is a Somerset cider - as most seem to be here - located just outside Taunton. It is meant to be an 'easy, soft cider' and is matured in oak barrels for several months. I have to say that I am taken with the website as brief as it is - certainly looks the right kind of cider (right kind... is there a right kind??? - no, could the usual suspects not answer that question... it wasn't meant for debate!) I particularly like the 'Great to take to parties' caption...

And so, this cider is golden, hazy and very still when served - it isn't that cold though. Positive! The smell is tannic and fruity; with a wee bit of ascetic going on too. Not sure what it is being served from but mostly cider here is in bag in box, so it could be ready to finish.

There is a strong fruity flavour to this cider - with the ascetic note probably adding to this a bit. It also feels a touch sweeter than dry, and the tannins are not at all drying in the mouth. Thinking about it, I can taste something - perhaps sucralose? It is soft though - a nice cider that is quaffable.

The aftertaste is lingering and fruity. Cider fruit on the bittersweet side. There isn't much acid in this drink to speak of, and it certainly doesn't compete with the tannin at all.

Hey, a cider served in London at the right temperature. Points to Southampton Arms:-)

Now, I have scored this cider down a touch because of it not being in top condition. However, this hasn't come straight from Harry, so it could have picked it up on it's travels. Unfortunately, I can only go by what I find at the time, so if anyone has better experience please shout.

A score of 69/100 sees it just missing an apple - which is a shame (I had subtracted the usual 5, but reduced it to 3... still didn't make enough difference) A good cider nonetheless. 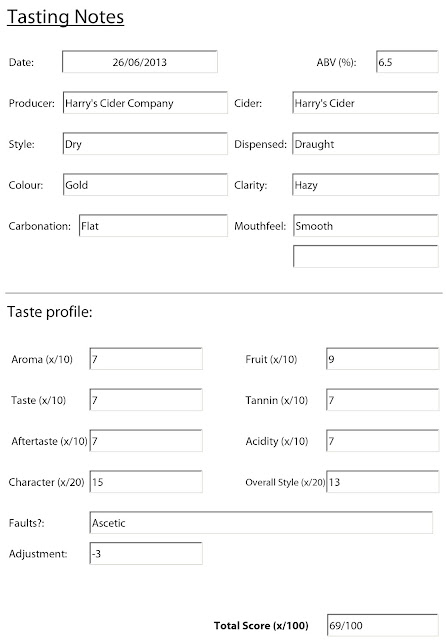