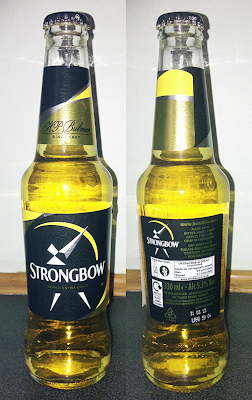 So, I have managed to nearly accomplish 300 cider reviews without including this particular concoction. At first, this was easy - it was only available in cans. But they cottoned on... the put it in bottles. I would have had to have bought a 6 pack though. So again, easy to avoid. Blast you Morrisons. Selling these damn things in singles.

I had thought to make this my 300th cider. But why celebrate with mediocrity. I have a special cider review for that. This shouldn't have it's moment marked... I was rather hoping to avoid it. And so, for my 299th cider review, I give you, Strongbow. It had to happen sooner or later.

On that note, I opted to walk away from this for a day - sometimes it is simply too hard to be objective (and it wouldn't be fair to Strongbow drinkers to simply diss their drink as an act of snobbery or self importance!)

Looking at the label, it says very little - "made with bitter sweet apples for cool, crisp refreshment". Perhaps I misunderstand the word 'crisp', but surely dessert apples produce more 'crisp' refreshment. It also has another mystifying statement, "Dry cider with sugars and sweetener". OK, either it is a dry cider or it contains sugar or sweetener. Why both sugar and sweetener? Or am I missing something?

Anyway, this is Bulmers flagship brand. According to Wikipedia (I know, not exactly the most reliable source) Strongbow controls 10% of the world sales of cider (I note the Wiki source is undated) and 20% of cider sales in the UK (same source - undated). The only other interesting snippet of information that doesn't appear to have been sterilised within the Wiki entry is that the Bulmers Strongbow tank is the largest tank in the world, holding 15 million gallons. Not sure where I would put that then!!

A small word about HP Bulmers though. Not that it matters to those who drink it, but it is, in fact, owned by Heinekin. So brewers have owned cider companies for a while then:-) However, this gives you an idea of the chain of command that goes into producing such a drink.

OK, enough factoids. On with the review.

Strongbow is a pale golden drink, and pours out foamy and bright. Looks a bit like the colour of lager, actually. The smell? Well, its apple sweets I have to say - a faint cidery note or two but mostly a sweet - boiled sweet aroma.

The taste is what I guess people see in lager over something more authentic - again, there is a nod to it's cidery claim but its very watery. There is some acid going on, as well as a tiny amount of tannin. For what there is it is pretty well balanced. I am also getting a bit of fruit out of the glass too, but it is all very faint and I would be pushing the envelope to suggest that this is satisfying. While this drink is rooted in cider, it has about as much in common with what I am more used to as its Carling, Stella and Carlsberg counterparts... a dumbed down drink for those who don't really care about cider (other than it is different from the lager their mates are drinking).

As a full juice cider producer, I must actually admit that I find this cider rather insulting. That Bulmers - a stalwart cider company and cornerstone member of the UK trade body, can peddle something so faintly cider and get away with calling it cider just shows how far the drinks industry has been turned on its head to accept mediocrity and falsity as its basis. Cider is better than this folks...

49/100 is a good score for this drink. It is much like its aftertaste - short and non eventful. 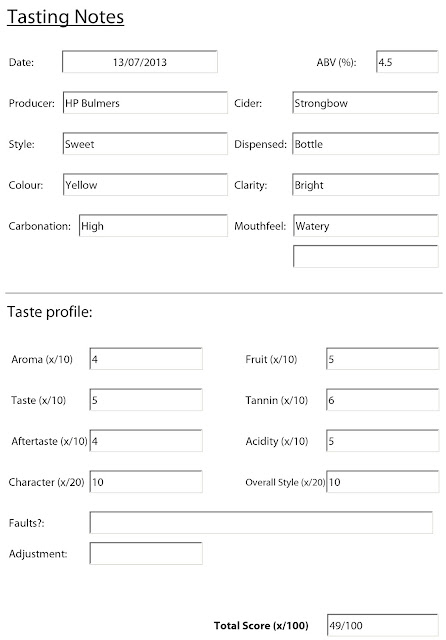 Email ThisBlogThis!Share to TwitterShare to FacebookShare to Pinterest
Labels: Bulmers