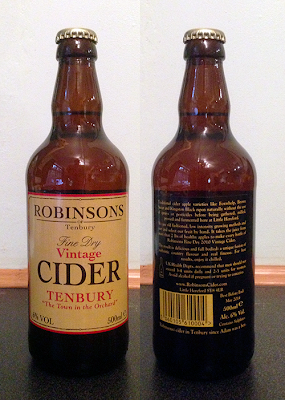 Robinsons. I am very glad to find this cider. On paper (well, on their website) they are a family producer, based in Herefordshire, who have been making cider for over 200 years. However, CAMRA has them on their list of ciders that are not real. I cant seem to find out why though.

Mind you, there could be any number of reasons for it falling foul of CAMRA's rules... currently. Pasteurisation would be the main killer for a lot of ciders... full juice as well as lower juice! I can think of many that pasteurise who aren't on the CAMRA 'not' real lists... though I am buggered if I am going to announce them on here (and there is little CAMRA seem to be able to do to find out. Perhaps its some of their rules that are wrong anyway.

I am not going to spent another blog post whining about APPLE though. Trying to be positive, at least they attempt to draw a line - even if that line is a bit misinformed and unwilling to listen to others who may know a little better.

Robinsons cider pours out deeply golden and with a moderate fizz to it. It is bright too... so I would argue it has been filtered. They claim that this is a dry (although the label shows the age as being 3 years old - 2010. Is that right, or is the label wrong?)

It smells very juicy - I can smell some bitter/tannin in there too. It all smells very clean and not bad at all. However, the first comment I have to make about the taste is somewhat less positive: syruppy. That's not such a good sign. It also, oddly, tastes quite sharp, which is at odds with the smell. It is quite sharp with rather faint tannin too - the tannin provides a little body (background noise?) Its also not very dry - the fruitiness could be coming from juice used to sweeten this a bit...

I have to confess, I wrote "I don't like this cider very much" on my notes. Working my way through the drink though, there is some more tannin than I first thought... but not a whole lot and certainly not as much as I thought from the smell. The aftertaste is long and sharp; the whole feeling warm in the through (so I am getting alcohol).

To sum up. think lemons and wood and you have a large part of the taste of this cider nailed. There is far too much acidic notes going on for me to really enjoy it, although I am still a bit in the dark about CAMRA's not real status. I could argue it is low juice, but I would rather think that the blend is balanced in that particular way... either way, it doesn't score an apple with 57/100 points. 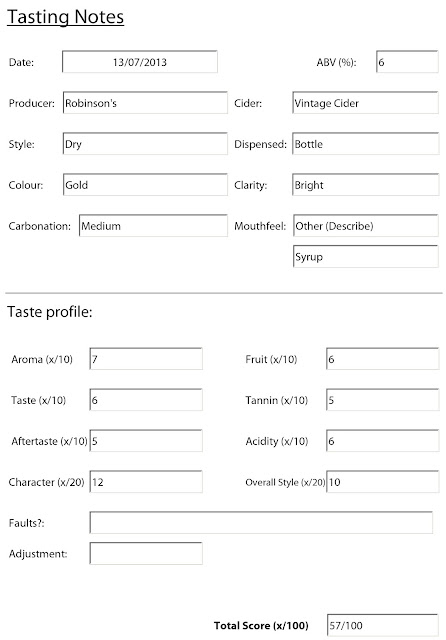 Email ThisBlogThis!Share to TwitterShare to FacebookShare to Pinterest
Labels: Robinsons