This is a bit of an odd cider to review; not that it really should be. It is made by Pershore College, near Worcester. Now, Pershore are very well known to me as one of the places a cider/perry producer can turn to for contract bottling. They will filter, pasteurise, sweeten and bottle a cider - well, they have the kit to do it. And I imagine it turns a pretty profit too.

I don't know if this has been made by the faculty of cider, the lecturers or the students. I like the idea of students learning the craft, and this cider certainly looks enticing and golden in the bottle. I like the clean look of the label too, although the name 'Avonbank' makes me think more of Bristol than it does of Worcestershire. At 7.4% its all its strength too - if it is the students they are certainly trying to produce the maximum strength cider possible!

This cider has a very high fizz - overdone to be honest as it almost violent when being poured out. Of course it is bright and filtered - what else could it be coming from Pershire!? I suspect it is pasteurised or sterile filtered too. Being quite pale gold in colour, I suspect the latter.

Now, I have said before that bubbles can help push a smell up your nose. Well, this one I cannot get close enough to it for a while as the bubbles attack my nose every time I go near it for a sniff! After they have settled, this cider gives off a low level cidery note - fruit and a little leather (which is a good smell on a cider).

However, the taste doesn't quite live up to that. It isnt a dry cider. That, and most of the tannins have been lost in over filtering. In the middle of the drink I start to get some gentle bittersweet taste that hints at body (and what might have been), but this is all lost to a large degree.

There are those who propose that filtering doesn't really harm a cider. I disagree, and hold this up as a solid gold example of the fact. Pasteurisation may give a little cooked taste, but sterile filtering strips out so much of the flavour it all but changes the profile - dumbing down the cider to a hint of what it might have been.

This cider is definitely sweeter than it should be. Apart from the strong alcoholic taste, it is really lost (sorry!!) It is as if the students have been let lose on the equipment to see what they can make as a test... overdoing everything in the process.

Now, please don't get me wrong It is not a *bad* cider. It is just dumbed down by all it's processing. I have scored it accordingly and it gets 64/100. So no apple I am afraid Pershore. 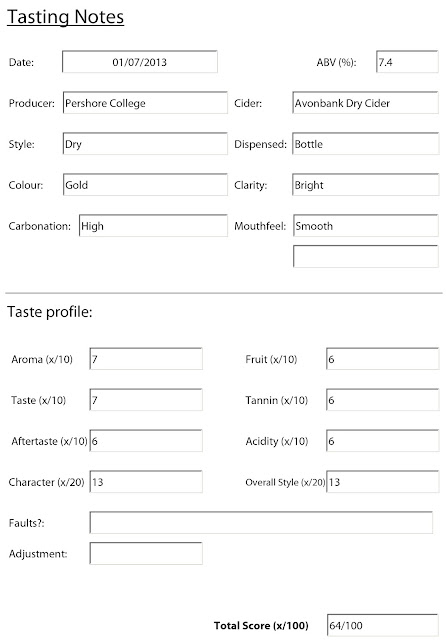