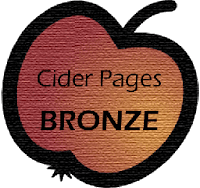 A Sainsbury's cider made by Thatchers for the Taste the Difference range. After the last one I expected this to be a slightly down graded Thatchers cider. After all, their own Vintage cider scored its very own bronze (I know, it doesn't mean much from here but at least it gets on to my own short list of a kind). The label claims "Medium dry with a depth of flavour" - "A rich and fruity cider with a touch of sparkle".

This cider is a 2009 vintage cider made from Dabinett and Redstreak apples. Now I have a lot of respect for both Dabinett (a very good bittersweet variety) and also for Redstreak (a full Bittersharp). These are good apples to lay claim to, and ought to produce an interesting cider. The stakes for this one are raised!

On opening, its a medium fizz. I would say more like a 'dab' of sparkle than a 'touch'. Now who is being picky?! Its a nice gold colour - which I am coming to learn is a common colour for a west country cider.There is also a distinct aroma which offers both tannin and acidity.

Here is the odd thing though - the cider taste doesn't deliver much acidity at all. Sure, there it is in the aftertaste, but not in the mouth. It does taste a bit sweeter than its medium dry, so may be that counters it. The bubbles may also lift the sweetness a touch too.

I am definitely getting the dabinett and, although the aftertaste carries a tiny amount of sharp, its mainly tannin that comes through. Would say that there is more dabinett than redstreak, although it is strikingly more balanced than a dabinett single variety.

This is nice and drinkable though, with a good character to it. A nice blend. I only marked down because it also definitely has a safe, pastuerised flavour which is common to many ciders that have been 'adjusted'.

Given that, not bad at all. I would recommend for those searching for something good with only a Sainsbury's to hand (although Sainsbury's also stock Henney's Vintage - so I'd go for that instead). And what do you know. It scored a bronze apple. Actually, having just finished it, I am not surprised. Its a good one.