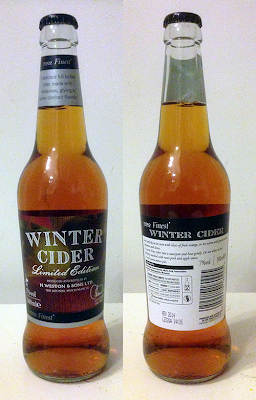 Well well well. My final cider for the year is... another supermarket cider. Also, it's another Westons... this time proudly stated on the bottle. My final plea this year goes to the supermarkets to do this for all bottles of 'own brand' cider. I think it would not be surprising if Thatchers and Aston Manor take up a good chunk... led of course by the new knowingly outdone Westons.

This is also a limited edition cider. I take it that this actually means that they are only running it through the Christmas period as opposed to it being a limited edition... pardon me for being slightly cynical at both Westons and Tesco - they aren't exactly known for saying things like they are (are they!) Anyway, it is a mulled cider... possibly following on the popularity of the very excellent Aspall version - and the sheer volume of smaller producers selling it at markets and festivals! Anyway, it is nice to find another one, so lets give this a go eh.

My first comments are about the instructions... it may be my own interpretation of a winter cider but this is NOT a mulled cider... there are no spices in it! The only difference between this and a normal Westons cider is that they have added molasses to it. OK, that is a slightly different kind of sugar than they normally use but... well... its a bit bloody lazy isn't it? Fair enough - my brain read 'mulled' when I saw the label, but lets be honest... its not a winter cider, it's just a cider. They even have the cheek to suggest that the drinker do the work by adding the spices!

A more serious point, and one worth bearing in mind is that, whilst it is OK to mull a cider at the point of sale (i.e. it is being adjusted for the punter at the time of drinking) none of the ingredients for mulling cider are included in the HMRC guidelines - so in fact a bottled mulled cider would attract about three times the duty of normal cider - ergo making it prohibitive to produce at a reasonable price. Saying that, I think Westons/Tesco never fail to skew something for their own ends eh. Cheeky buggers!

What is it like then? Having warmed it through (and refused to 'add my own spices') it smells, well, a lott like 1st Quality/Marcle Hill/The Guvnor. Oddly, it is slightly carbonated so fizzed a bit in the pan, but now it smells slightly bittersweet, sweet and quite juicy with a toasty/treacle aroma that must come from the molasses.

I should have tasted this cold, as the heating seems to make it rather watery.and cook out the more complex flavours. Don't get me wrong - it is pleasant, warming and sweet (I have been out in the wind and rain, so it is a welcome distraction). There is a bit of molasses coming through, but on the whole I am getting the sweetness of the cider and some tannins from the fruit. I think it would work well as a mulled cider, so perhaps my advice would be to buy the spices when you buy this... or, quite frankly, buy the spices and a bottle of the Henneys Vintage that is sat near to the Winter Cider and go with that. It is the same price and a damn good cider to start with. OK, lets be fair to Westons, the Westons Vintage would work well too.

There is a lingering aftertaste and it is mostly sweet with some apple too.

Let me be straight - this isn't such a bad cider. I think my sarcastic tone is probably because I feel it is advertised as something it isnt - or squarely fails to live up to. I have scored it as a cider as, well, that is what it is - and it scored 61/100... which is actually better than I had given it credit for. 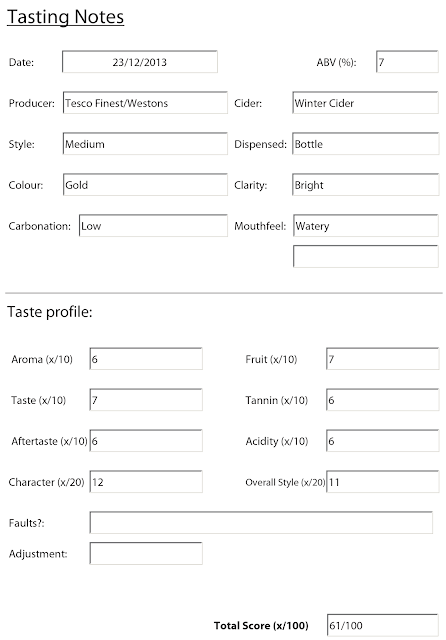