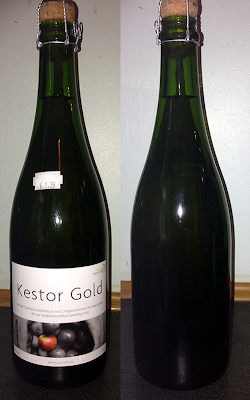 The cider I have chosen for this evening is something a little special - a traditional method cider from Devon producer Little Weeke Cider Company. I got this from the Cider Museum in Hereford earlier this year and, at £9.95, have saved it for a decent evening preferably with company. Well, I nearly got there - it is not a bad evening, but I don't have the company so will have to drink it on my own.

Oh well, it is a tough job eh!

Traditional Method cider, alongside keeving, is regarded by many producers as the pinnacle of cider. Looking back in history, I guess we see this style of cider fetching the best prices and gracing the tables of the gentry (as opposed to the still cider - which was more of the farmers lot). Making it is also quite a lot of work... essentially you do all of the things that is done to create champagne... except for the raw materials! You see, bottle conditioning is half the job. However, there is yeast settlement and, for highly sparkling cider this will not do... opening the bottle stirs up the yeast and you lose the clarity. So, by disgorging the yeast (basically, getting rid of it) you get a highly sparkling, clear cider... the best have a mousse like fizz and are every bit as good as champagne... better if what you are after is taste!!:-)

OK - that drove a coach and horses through the process of producing traditional method cider. Note the name; in the UK we should really call it traditional method. You cannot call it Champagne method as the Champagne region is in France and is protected. You shouldn't really call it methode traditionelle (it is French... the cider is British) and Methode Champagnoise is right out! I even have a bit of a problem calling it 'Cider Bouche' as that is a mix of French and English.

I am not going to steal from others research, but if you read 'Ciderland' by James Crowden then you will discover research that demonstrates punted (heavy duty) bottles, and their use was recorded in England before Dom Perignon took the idea and went on to create the Champagne style. Now, I have to say he DID develop the riddling/disgorging of the drink... that isn't English... but I quite like that this style owes as much to the British as the French and is essentially a collaboration. And the fact that Dom Perignon was a monk just makes the whole thing very colourful!

Opening the bottle with a pop, it pours out golden and with a fine creamy mousse carbonation that is persistent... so far, exactly as it is supposed to be! The sell is delightful - a touch of farmyard about it with light sharp aroma's coming through. As the Devon 'tradition' is much more balanced tannin vs sharpness than either Herefordshire or Somerset I expect this to have a bit of a kick as well as a fruity tannin to it. Coming back to it again (child duties called... why won't children just go to be without a fuss:-) the smell is deeper with a rich aroma coming off it as well as the sharpness.

The taste is lovely, although it does have a bit of apple sweets about it. On the whole it comes across as a well made west country cider with a lovely sparkle that enhances the sharpness and gives the somewhat mellow tannins room to develop in the mouth. There is also a bit of earthy gravelliness about this cider too. Lovely. However, I cannot get the image of boiled sweeets as an additional flavour in my mouth... perhaps it is a specific variety that I haven't come across before. Certainly there is a dominant variety in here, but the boiled sweets?!

It is a clean, fresh cider that has a deep fruitiness to it. I think I am making it sound more complex than it is, but I do like this cider. The aftertaste is long and fruity... just as well I have the bottle to myself! It is a bit of a shame that it cost a tenner to buy... though my experience of buying ciders from the Cider Museum is that you do pay a bit of a premium for them.

Apple sauce. That is what it is!!! I wonder if the juice was pasteurised for holding prior to fermenting...

Anyway, this cider scores a great 81/100 - earning itself a silver apple from me. 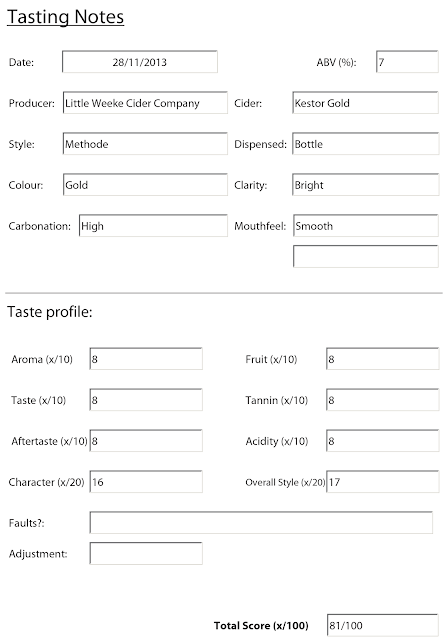