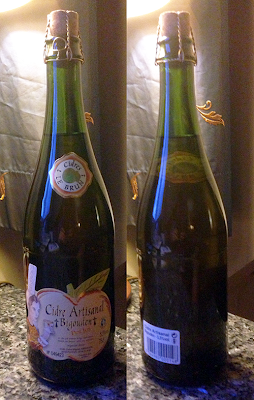 And that, for the Great British Beer Festival, is that! Phew, it was a session by any standards although I was very glad to have many hours to do the reviews. And as a result, we are now in October... some months away from the festival itself! I hope that it does act as an advert for GBBF though. I know I have issues with CAMRA and their lack of interest in cider, but the more people want cider the more they have to stock!

Going backwards a touch now (my trip to France was a bit obscured by the GBBF reviews). I have some more French cidre to interest (or bore) you with:

There is going to be a bit of a problem in reviewing cidre this year – I am in France again, but the location – Toulouse and Gaillac (Mid-Pyrenees) – are not known as cidre producing areas. And in France that can be a problem; if you live in a wine making area the number of cider makers is going to be pretty negligible (if there are any at all)… certainly commercially. To the French, this is a way of protecting a region’s speciality and tradition. To me, I prefer the UK way of doing things although would rather that we could do more to differentiate the ‘pur jus’ ciders away from the ‘non jus’ ciders.

To reacquaint myself with the French tradition of cider, I opted to try a cidre from a name that I know and respect. Le Brun seem to have exploded across the French cidre scene (if French cidre can explode!!) and a couple of days near Paris meant that I had a chance to visit Auchan. I confess to being a bit surprised to see it. As a note, I also found this cidre in Gaillac (at L’Eclercs – which I think are associated with Auchan). I have seen only too well what happens when a product ‘goes national’… recent nationalised ciders in the UK seem to have chosen quantity over quality (I intend on retrying the Orchard Pig range soon as I fear that the score may well have dropped).

Anyway, lets see what ‘Bigouden’ has to say for itself. Not surprisingly, Bigouden is a small region within the larger Brittany area of France. There is not that much to say beyond that, although check out the traditional head gear for the ladies - clearly designed to prevent them from going though doors etc.

This cidre is presented in the traditional way in a 750ml bottle with a caged cork.  It is golden and highly sparkling. Actually, it is rather too highly sparkling as I failed to chill the bottle before opening it (and nearly killed a member one of my travel partners in the process!).

I can smell the cidre pretty freely – a part of having a highly sparkling drink. It is fruity in the nose, there is a bit of sulphite in the smell too. It seems to be quite juicy – though it is a brut (the French equivalent of a dry).

The taste is mild and juicy. There is not a heap of tannin to it; though it does seem to be full bodied in the mouth. There is some acid going on in here too. I have to say, in all it is a fairly average cider – it isn’t setting me alight in any case… not like the last Le Brun I tried. I am getting lots of flavours from the drink though – aside from the very pronounced orchard fruit, there is the taste of peach and raspberry which makes this drink feel rather summery (so it isn’t all bad!)

I have to say that this cidre could have benefitted from being a bit colder. Temperature is a subject that deserves it’s own ‘Cider101’ – and may be soon. Cider is a sensitive drink and environment, temperature and even weather can influence perception.

There is a moderate length of aftertaste, which is pleasant.

Overall, I did enjoy this cidre. It wasn’t quite what I expected from Le Brun, but it was a reawakening to French cider. And for that it didn’t disappoint. I would be interested in hearing from any French cidre drinkers to see how they see the quality of Le Brun and whether it has dropped: not that I would be surprised to learn that it has a bit… how many British ciders could you point at and say that it is worse than it used to be as it grows in popularity? It’s a hard thing to get right (especially when profits are all important!) 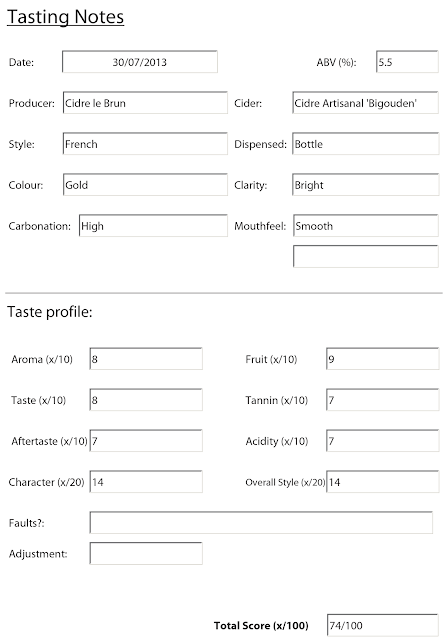