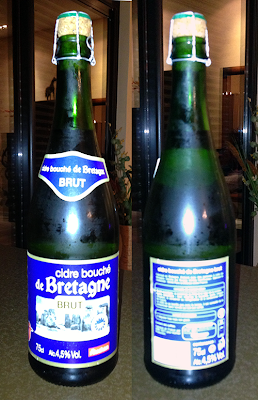 Sometimes pictures just don’t tell you the story well enough. By taking images of the front and back of the bottles there is as much information as someone needs who is seeking to try a cider for themselves… after all, what’s the point of ranting about a cider without showing what it looks like… On this occasion, however, I thought it might be nice to show you the ‘other’ picture by way of context... 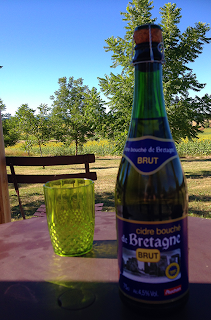 Yes, I am trying to make you jealous and showing off (a bit). But just in case this turns out to be a terrible cidre with a great review, its probably helpful to provide a suitable excuse beforehand!

This cidre, Auchan’s ‘own brand’ cidre, is perhaps not the most auspicious of cidre to present at a sunny barbeque. However, I was boyed by the Loic Raison review so am going to keep an open mind. Sadly, I have no idea who actually produced this cidre for Auchan (so if anyone else kmows any more, then do tell)

And to the review. It is (guess what) golden, highly sparkling and bright. A standard French cidre then… I must find an abbreviation to sum this up quicker as it gets a bit dull to read that something is bright, golden and highly sparkling each and every time!

The smell is very clean. Too clean if you see what I mean. Sterilised almost. Faintly fruity and vinious. It smells more like an apple wine to be honest (although at 4.5% it’s a fair bit short on the alcohol!) I am struggling to find anything particularly interesting to say about the smell – it’s a bit of a ‘ghost’ cidre so far.

The taste is very clean and, well, fairly tasteless to be fair. There is some apple to it, but it is just watery apple drink rather than anything remotely complex or remarkable. Just a bit too dumbed down (is it a standard aspect of cider found from supermarkets that the buyers require something that is a bit like cider but not really). Mind you, it is more refreshing that Carling for the simple fact it is cold (perhaps the Carling marketeers should have looked at temperature when they were doing their ‘refreshment survey’).

Staying with this cider, there is a hint of Bretagne cidre about it. I suspect the base cidre from which this was diluted was pretty good. Unfortunately for this cidre, they rationed it out far too much and killed it.

The aftertaste was short although, considering what I have said above, was quite nice.

If this is all you can get (and even in Southern France it isn’t) then I guess it is either this or wine. It is cheap and pretty freely available. However, if you are wanting an experience of cidre then this isn’t going to satisfy. A score of 57/100 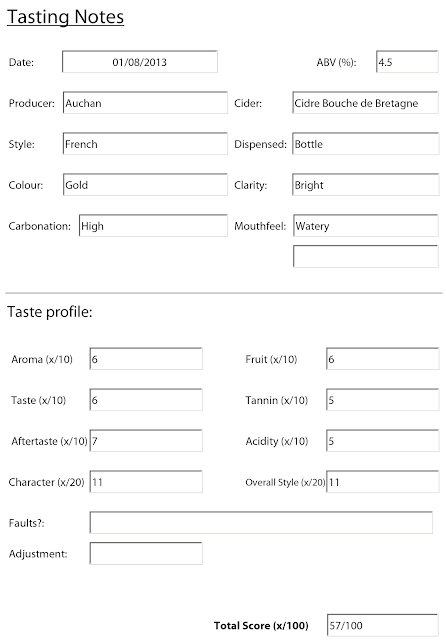